Ever since Sex and the City’s Carrie Bradshaw sashayed down New York’s Fifth Avenue for the final time, fashion fundis have been looking for a trendsetting icon to fill her Jimmy Choos.

Emily (Lily Collins) is styled in the hit Netflix romcom by Patricia Field, the same costume designer who created Carrie’s cutting-edge looks. To the uninitiated, Emily is a young woman who moves from Chicago to Paris for a job in social media and marketing. Along the way, she navigates culture shock, love, friendships and workplace roadblocks – all while sporting bright colours, clashing prints and OTT accessories galore. According to stats from fashion search engine, Lyst, there's been record search enquiries into Emily's hats since the show graced Netflix. PHOTO: NETFLIX

And fashion followers are eating it up.

Recent data by global search platform Lyst shows fans have been searching for brands and products featured in the series, especially some of the show’s more affordable statement pieces. Emily’s headgear has been a major hit. Searches for Kangol’s “bucket-style” hats increased by 342% on Lyst, while searches for “beret hats” and “berets” in general have risen by 41%.

Her light-pink Aldo Handful bag sold out before the show aired (thanks to the trailer) and searches for other Aldo-branded handbags experienced a 64% jump on Lyst. In episode seven, Emily sports Marc Jacobs’ Jelly Snapshot Camera Bag in hot pink and searches for the item spiked by 92%. In a later episode, she carries a Kate Spade Nicola bag in pink teddy, which sold out and caused a 34% rise in online demand for Kate Spade.

Mon dieu, you might say, but that Emily has a certain je ne sais quoi no matter what the critics say. Bet all those designers are saying a hearty merci beaucoup.

Here are a few already iconic looks from the show. 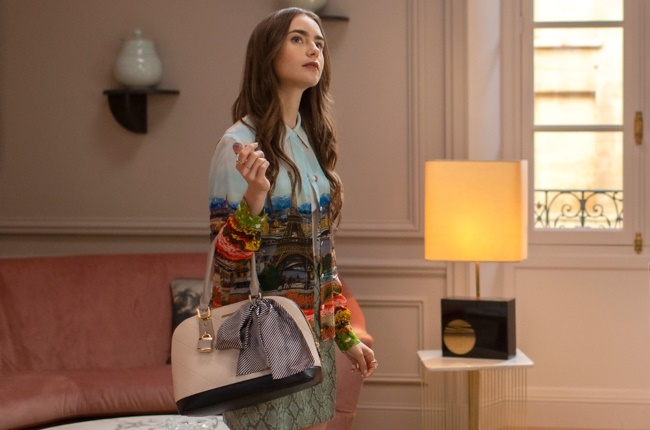 The young ingénue pairs a simple red beret with a black and white check jacket and shorts from Veronica Beard. PHOTO: NETFLIX While attending a Paris Fashion Week show, Emily sports a matching puffer coat and dress from Virgil Abloh's brand Off-White. PHOTO: NETFLIX
We live in a world where facts and fiction get blurred
In times of uncertainty you need journalism you can trust. For 14 free days, you can have access to a world of in-depth analyses, investigative journalism, top opinions and a range of features. Journalism strengthens democracy. Invest in the future today. Thereafter you will be billed R75 per month. You can cancel anytime and if you cancel within 14 days you won't be billed.
Subscribe to News24
Next on You
See the pics! Katie Holmes packs on the PDA with her hot new guy, Bobby Wooten III