See the pic! Johnny Depp baffles fans with a snap of himself collecting an award behind bars Johnny appeared with a grin and shades on in the bizarre shanpshot taken in the Bahamas. (Photo: Energa Camerimage/Instagram)

He’s known for being an eccentric, but Johnny Depp has left fans wondering what he’s up to with his latest sighting.

The 57-year-old actor posed behind bars in the Bahamas with his award for actor with unique visual sensitivity presented to him by the Camerimage festival.

Johnny, who owns a small island in the Bahamas, won the award for his role as an ex-war photographer who travels to Japan in the 1970s to document the effects of mercury poisoning in the upcoming drama Minamata.

But what got fans tongues wagging was the odd picture – which was posted to Camerimage’s social media accounts – and for which no explanation was offered. Johnny penned a lengthy letter of gratitude to the International Film Festival of the Art of Cinematography, which they published online. (Photo: Twitter)

He also penned an acceptance letter to the event’s organisers in which he expressed his gratitude to the cinematographers he’s worked with during his long career.

But few people are pro-Johnny these days. In fact, Hollywood appears to have turned its back on him after he lost his recent libel case when a judge ruled he did physically attack his ex-wife, Aquaman actress Amber Heard, numerous times.

The ruling came after British newspaper The Sun called the Pirates of the Caribbean star a “wife beater” after Amber’s claims that she endured endless abuse at the hands of her often-drunk and drugged-out husband. Johnny sued the newspaper and the sordid saga of their marriage was played out in the court.

The subsequent fallout saw Warner Bros asking him to step down from their Fantastic Beasts franchise. He starred in the first two movies as Gellert Grindelwald and was set to appear in the third.

Despite being booted from the film, he’s still getting a $10-million pay cheque, thanks to a “pay-or-play” clause in his contract which guarantees his salary if he’s released from the contract. 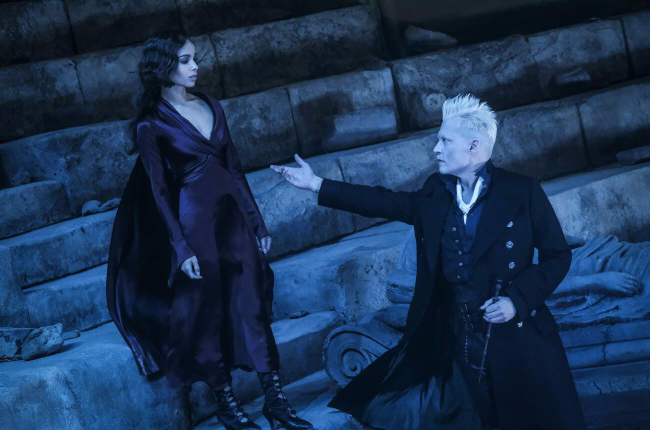 Johnny in a scene from the second Fantastic Beasts movie, 2018's The Crimes of Grindelwald, with Zoe Kravitz. (Photo: Gallo Images/Alamy)

Danish actor Mads Mikkelsen is reportedly lined up to take over his role.

Some have claimed this could be the death knell for the career of one of Tinseltown’s biggest and richest stars.

“There is a sense in Hollywood that Johnny Depp is a tainted brand, and his dominance of the box office in the 2000s has come to an end,” says Matthew Belloni, former editorial director of the entertainment industry publication The Hollywood Reporter.

“I think this is the final nail in the coffin of Johnny Depp’s brand,” agrees celebrity-branding expert Jeetendr Sehdev.

Yet some continue to favour him. He remains the face of luxury fashion house Dior’s male fragrances and the French company has not publicly commented on their future with the actor.

We live in a world where facts and fiction get blurred
In times of uncertainty you need journalism you can trust. For 14 free days, you can have access to a world of in-depth analyses, investigative journalism, top opinions and a range of features. Journalism strengthens democracy. Invest in the future today. Thereafter you will be billed R75 per month. You can cancel anytime and if you cancel within 14 days you won't be billed.
Subscribe to News24
Related Links
What's next for Johnny Depp: The rise and fall of a man who once commanded Hollywood
Elon Musk challenges Johnny Depp to cage fight over Amber Heard affair rumours
Johnny Depp’s explosive texts heard in court during libel trial
Next on You
All hail the queen! Will Angela Bassett make history by winning an Oscar for her powerhouse Black Panther performance?