Seth Rogen was spotted on the set of Pam & Tommy – check out his hilariously kitsch ’90s look! Seth Rogan is unrecognizable as Rand Gauthier, the man who is believed to have stolen Pamela Anderson and Tommy Lee’s sex tape. (PHOTO: THEIMAGEDIRECT.COM/MAGAZINEFEATURES.CO.ZA)

Much has been made of actors Lily James and Sebastian Stan’s dramatic transformations in the biopic Pam & Tommy – but they’re not the only A-listers who’ve had major makeovers for the upcoming drama series.

Comedian Seth Rogen was recently seen on the set of the limited series, which depicts the turbulent relationship between Mötley Crüe drummer Tommy Lee and Baywatch actress Pamela Anderson.

Seth, sans beard and showing off his slimmed-down physique, looked worlds away from his usual self as he sported a mullet and a ’90s ensemble of a striped shirt, jeans and trainers. The 39-year-old actor stars in and is an executive producer on the miniseries, which focuses on Pam and Tommy following the release of their unauthorised and infamous sex tape, which was recorded privately during their honeymoon in 1995.

Seth plays Rand Gauthier, the electrician who stole a safe from Pam and Tommy. When the rocker refused to pay $20 000 for work he’d done at the couple’s home and threatened him with a gun, Rand hatched a revenge plan.

The electrician stole the couple’s safe, which contained a 54-minute home video that would later make quite the splash all over the world. The comedian stars in the film, as Rand Gauthier, and serves as executive producer. (PHOTO: THEIMAGEDIRECT.COM/MAGAZINEFEATURES.CO.ZA)

There’s a definite sleazy vibe to the character’s overall look and for Seth's fans as well as those who are curious to see what Pam & Tommy has to offer, it appears that Seth could very well end up being one of the highlights of the series.

Also seen on set was Romania-born Sebastian (38), who plays Tommy.

The Marvel star was spotted with fake tattoos adorning his chest and his Calvin Klein underwear on display as he took a break from filming. 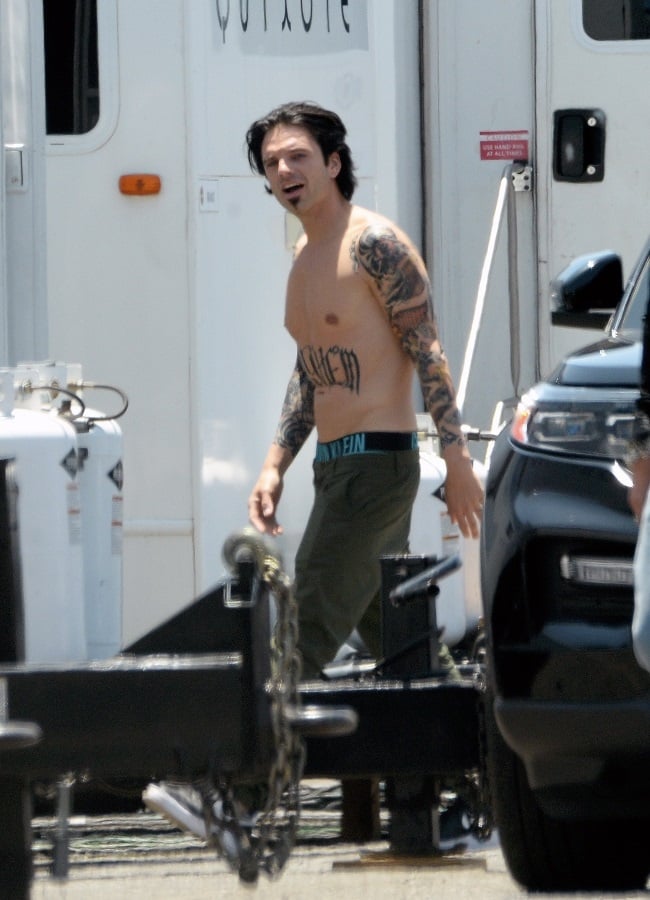 English actress Lily (32), who plays the blonde beauty, was nowhere to be seen. However, her double, American actress Sonia Rockwell, was spotted dressed up as “pretend Pam” for the day. Sonia Rockwell, Lily James' double in the film, donned a floral jumpsuit for one of the scenes. (PHOTO: THEIMAGEDIRECT.COM/MAGAZINEFEATURES.CO.ZA)