2020 was such a stinker of a year that these long-time lovers decided there was only one way to redeem it: by finally getting married after nearly two decades together.

Appearing on an episode of the US show The Talk, John Corbett (60) revealed how he and Bo Derek (64) tied the knot in an intimate ceremony last year.

"I can't believe I forgot to tell you. Around Christmas time we got married. Bo and I got married," the My Big Fat Greek Wedding actor said, showing off his wedding band to host and actor friend Jerry O'Connell.

"We're pretty private people, we didn't make an announcement, all our friends and family knew but this is the first time either one of us has said anything publicly about it because really we haven't had an opportunity. So, you're my buddy and now I guess I'm telling all of America, or the world."

??Breaking News!??
John Corbett reveals exclusive breaking news about his relationship with Bo Derek to the hosts, including his good pal @MrJerryOC ?? pic.twitter.com/tP1lfjmPL7

With all the doom and gloom that came with the pandemic last year, the couple decided to give it a positive spin by getting married.

"We didn't want 2020 to be that thing that everybody looks back at and hated," the Sex and the City actor said. "We thought, let's get one good thing around it and did it around Christmas."

The pair, known for keeping their personal lives pretty private, join long-timers Gwen Stefani and Blake Shelton who got hitched after six years together and Spice Girl Emma ‘Baby Spice’ Bunton who married her partner of 21 years, Jade Jones, this year.

Previously Bo, star of 1979 hit movie 10, insisted that getting hitched was just not a priority.

"Because we're the abnormal people. It's not really a conscious decision not to, it's just at our age we're not going to have children; we're not building a new family together that this is important to a family tree,” she said to Entertainment Tonight (ET). “So, for us, it would just be a piece of paper". 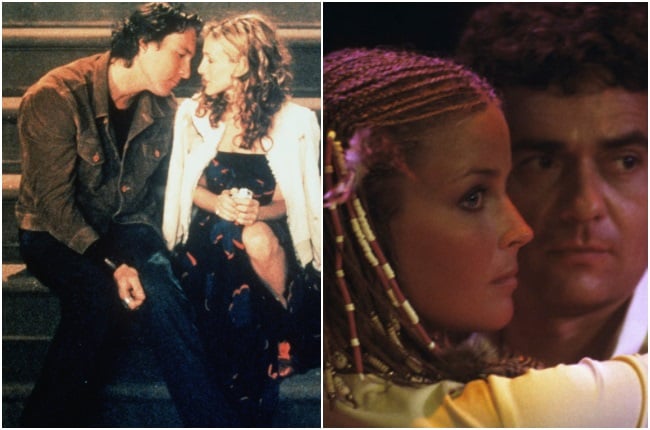 John is best known for his role as Aidan Shaw, one of Sarah Jessica Parker's lovers in Sex and the City (left). Bo starred as Jenny Hanley opposite Dudley Moore in the 1979 flick 10. (PHOTO: GALLO IMAGES / GETTY IMAGES / WARNER BROS)

The actress hadn’t dated for years following the death of her husband, actor John Derek, who had died of a heart attack, but Hollywood agent Norby Walters insisted she needed a date to the Oscars party.

At the time John also wasn’t looking for romance but their mutual friend, Norby, wasn’t taking no for an answer.

"I said, 'I'm not dating anyone', and he said, 'I'll get you a date, Corbett!' And he set me up with Bo," recalls John, who’ll be reprising his role in the upcoming Sex and the City reboot, And Just Like That. "I was very intimidated!"

And the rest, as they say, is history. “We enjoy each other’s company; we make each other laugh,” John says of their almost 20-year relationship. (PHOTO: GALLO IMAGES / GETTY IMAGES)

"It was just an attraction, a comfort,” Bo told Fox News. “He makes me laugh all the time. He’s full of life, full of joy. I became attracted to him and I still am. We take things day by day and I think we are still there."

The couple, who’ve now been together for almost two decades, believe it’s the simple things that contribute to their long-standing bond.

"You have to be in love. Really, deeply in love. And funny enough, we're such opposites in so many ways,” Bo told ET.

While for John, it’s been his leading lady’s attentiveness that’s had him hooked since day one.

We live in a world where facts and fiction get blurred
In times of uncertainty you need journalism you can trust. For only R75 per month, you have access to a world of in-depth analyses, investigative journalism, top opinions and a range of features. Journalism strengthens democracy. Invest in the future today.
Subscribe to News24
Next on You
There's no faking this hot romance! Here's how Jennifer Lopez is whipping Ben Affleck into shape