Spot the baddie! Jason Momoa gives fans a glimpse of his Fast and Furious 10 character Jason Momoa is excited to be playing the villain in the upcoming Fast and Furious 10 flick. (PHOTO: Magazine Features)

The actor was snapped on the set of Fast and Furious 10 for the first time since announcing he'd be joining the franchise as the villain. 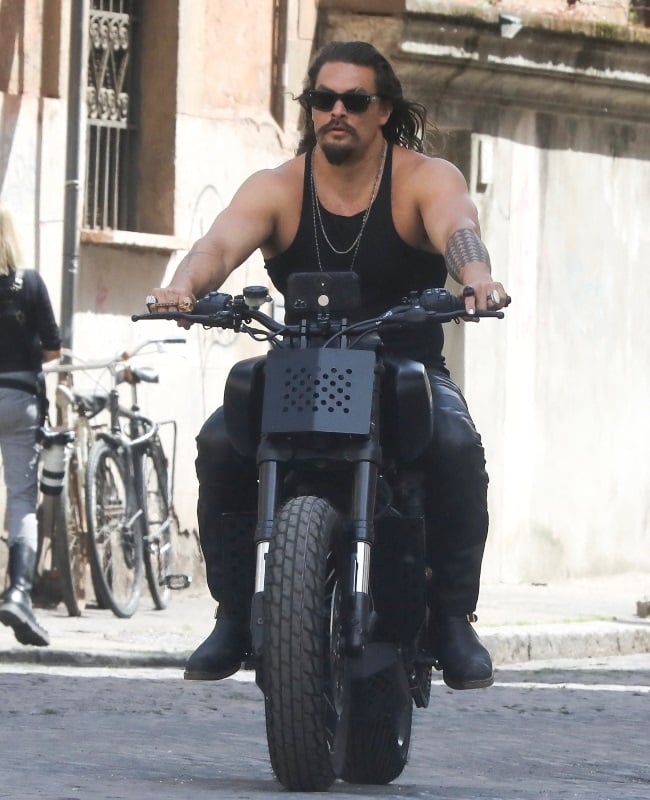 Jason on the set of Fast and Furious 10. (PHOTO: Magazine features)

“It’s fun. I get to play the bad guy, which I haven’t gotten to do for a while,” he said earlier this year.

But, he added, his character won’t be your typical baddie of the big screen. Jason describes him as “a very flamboyant bad boy” with “a little panache!”

Images show the 42-year-old actor riding through the cobbled streets of Rome, Italy, and chatting to production crew.

He's wearing a black vest, and naturally his bulging biceps are on full display. And why not? After all, Jason works hard at maintaining his beefy physique. Jason chats to a member of the production crew in between scenes. (PHOTO: Magazine Features)

“I get up at 5am and I train hard. I’ve got two young children so I have to get up early,” he previously told Men’s Health.

“But I like it. Morning is when I do all my best work. Whenever I wake up, I’m up. I don’t lay there like an idiot. I get up, run up a hill, get some exercise and have some time with my thoughts.” The movie is being shot in a few cities around the world, including London. (PHOTO: Magazine Features)

The actor might be playing the character everyone loves to hate in the hugely successful franchise, but off-screen he’s adored by his co-stars.

Tyrese Gibson, who reprises his role as Roman Pearce, welcomed Jason to the Fast family shortly after news of his casting broke.

The movie is expected to hit theatres in May next year.

We live in a world where facts and fiction get blurred
In times of uncertainty you need journalism you can trust. For 14 free days, you can have access to a world of in-depth analyses, investigative journalism, top opinions and a range of features. Journalism strengthens democracy. Invest in the future today. Thereafter you will be billed R75 per month. You can cancel anytime and if you cancel within 14 days you won't be billed.
Subscribe to News24
Related Links
Back together again? Jason Momoa and Lisa Bonet spark reconciliation rumours
What to watch | Rich people behaving badly on holiday, Jason Momoa is out for revenge and a...
Covid took its toll: Jason Momoa and Lisa Bonet on the collapse of their 16-year romance
Next on You
Thandiwe Newton’s been making headlines – and fans and her team are increasingly worried