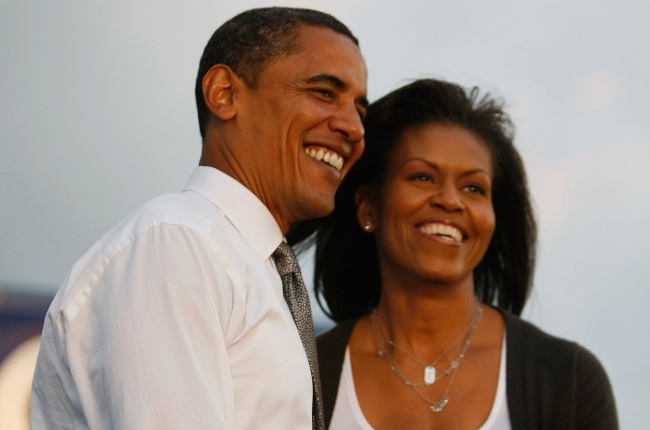 Barack and Michelle Obama have never been afraid to show their affection for each other. (PHOTO: Getty Images/ Gallo Images)

When you’re looking for a perfect couple, the Obamas are definitely among the first who spring to mind – but it’s been hard work, they admit.

As they celebrated 29 years of marriage recently, Michelle shared a throwback photo of her and Barack lounging on a couch in the early days of their relationship and another more recent pic of them in a similar pose.

“How it started vs how it’s going,” the former American first lady wrote in the caption. “Happy anniversary, Barack – love you!”

Barack (60) later shared an image of his own and used the opportunity to sing his wife’s praises.

“Over the past 29 years, I’ve loved watching the world get to know you not just as a daughter of the South Side but as a mother, lawyer, executive, author, first lady, and my best friend,” he shared. “I can’t imagine life without you.”

Michelle (now 57) was 25 when she met Barack at the law firm Sidley Austin LLP in Chicago. She was assigned to mentor him when he arrived there to gain work experience while completing his legal studies.

But it got off to a bad start.

“He was late. Late. I was like, ‘Is he trifling? The black man’s gonna be late on the first day?’ ” Michelle said in an interview with Good Morning America host Robin Roberts to promote her 2018 book, Becoming.

But when he finally arrived she was impressed with “his rich, even sexy baritone and his strange, stirring combination of serenity and power”.

“Barack Obama has always walked like Barack Obama. Like he’s got all the time in the world. He had that stride. I was like, ‘Dude, you’re cute’.”

Still, Michelle had a game plan for her career and men didn’t factor into it.

“I’d made a declaration that I was off men. I was focusing on my career.” The couple dance during the Western Inaugural Ball to Beyoncé's version of At Last in 2009. (PHOTO: Getty Images/ Gallo Images)

But it wasn’t long before her resolve faltered. One summer evening they stepped out to get ice cream and Barack leaned in for a kiss.

“As soon as I allowed myself to feel anything for Barack the feelings came rushing – a toppling blast of lust, gratitude, fulfilment, wonder.”

In her book Michelle admits their marriage went through a dip because of the stress of their hectic schedules.

At one point she and Barack resorted to marriage counselling.

“There are so many young couples who struggle and think that somehow there’s something wrong with them,” she told morning show host Robin Roberts. “And I want them to know Michelle and Barack Obama have a phenomenal marriage and love each other but we work on our marriage. And we get help with our marriage when we need it.”

Counselling also taught her that her happiness wasn’t Barack’s responsibility – it was up to her. “I started working out more, I started asking for help. Not just from him but from other people. I stopped feeling guilty. It’s important for me to take care of myself. That’s not on Barack.”

We live in a world where facts and fiction get blurred
In times of uncertainty you need journalism you can trust. For 14 free days, you can have access to a world of in-depth analyses, investigative journalism, top opinions and a range of features. Journalism strengthens democracy. Invest in the future today. Thereafter you will be billed R75 per month. You can cancel anytime and if you cancel within 14 days you won't be billed.
Subscribe to News24
Related Links
Michelle Obama talks lap swimming and knitting as she ‘moves towards retirement’
Barack Obama opens up about the perks and pitfalls of life in the White House in his new memoir
You’re going to love it here! The sweet way the Bush family welcomed the Obama girls to the White...
Next on You
Singing, dancing and fun times: David Beckham and daughter Harper have a blast at The Weeknd’s concert