The real cause behind Tiger Woods’ horrific crash Following the horrific crash, Tiger Woods is now back at home and focused on his recovery. (Photo: Getty Images/Gallo Images)

It’s been less than two months since golf legend Tiger Woods was hospitalised after a near-fatal car crash, and authorities have revealed that speeding was the cause.

Tiger was driving at about 140km/h in a 72km/h when he lost control of his SUV on 23 February, according to the Los Angeles County Sheriff’s department.

County Sheriff Alex Villanueva said Tiger (45) veered over a median before hitting a curb on the opposite side of the road. It is believed the SUV he was driving hit a tree while travelling at 120km/h, sending it flying into the air. 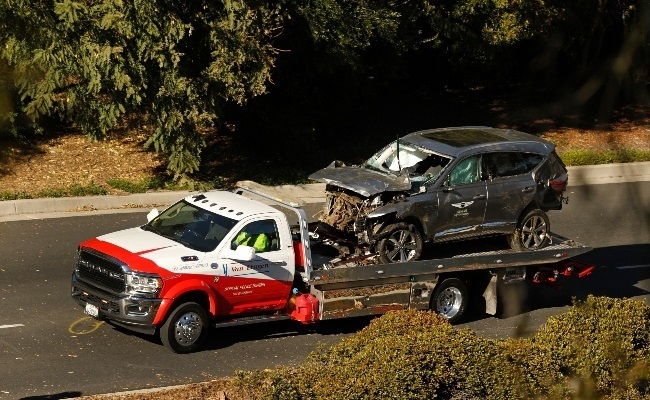 Tiger had a narrow escape when his SUV careened off the road on a steep hill in California. (Photo: Getty Images/Gallo Images)

“The primary causal factor for this traffic collision was driving at a speed unsafe for the road conditions and the inability to negotiate the curve of the roadway,” Villanueva said at a press briefing.

There were no signs that the golfer was intoxicated or impaired and his seatbelt saved his life, authorities said.

The damage to the vehicle was catastrophic and rescuers had to cut the golf champ out of the wreckage. If he hadn’t been wearing a seatbelt, it’s unlikely Tiger would’ve survived.

READ MORE| Can he come back again? Long road ahead for Tiger Woods after horror car crash

He had an open fracture of his right leg – bone protruding through flesh – and his ankle was shattered.

Tiger has already had several surgeries and more await, along with months of rehab.

He will not be prosecuted for the crash, as this is only permitted under Californian law if excessive speeds are witnessed by a law enforcement officer or an independent witness, and there were no witnesses on the scene that day.

The golfer’s SUV went hurtling off the road while he was negotiating a steep hill with sharp bends, in Hawthorne Boulevard, in Rancho Palos Verdes, a wealthy suburb in California. That stretch of road is notorious for crashes, according to residents and authorities.

Tiger thanked those “who came to assist me and called 911” via a message on Twitter.

“I will continue to focus on my recovery and my family, and thank everyone for the overwhelming support and encouragement I've received.”

An insider revealed to People magazine that after spending a month in hospital, Tiger is now home in Florida with his children, Sam (13) and Charlie (12), and “knows he is lucky to be alive”. He is focused on his recovery and his rehabilitation plan.

“He is still recovering and has some pain, but he is in good spirits,” the source added.

We live in a world where facts and fiction get blurred
In times of uncertainty you need journalism you can trust. For only R75 per month, you have access to a world of in-depth analyses, investigative journalism, top opinions and a range of features. Journalism strengthens democracy. Invest in the future today.
Subscribe to News24
Related Links
Tiger Woods excited to play with son Charlie for the first time at 2020 PNC Championship
Tiger Woods’ mistress Rachel Uchitel breaks her silence on their sex scandal
Golf’s next big star? Tiger Woods’ son comes out swinging to win tournament
Next on You
Fallen hero Lance Armstrong’s son faces legal battle in sexual assault case