Tiger Woods has served as Charlie's caddie at some junior tournaments so they’re comfortable being out on the course together. (Photo: Gallo Images/ Getty Images)

Will it be a case of a chip off the old block for Charlie Woods when he takes to the golf course next month? The 11-year-old has committed to playing with his dad, Tiger Woods, at the PNC Championship at the Ritz-Carlton Golf Club in Orlando, Florida, in December.

The tournament has paired major champions with their sons since 1995, the year before Tiger turned pro. This will be the first time the 44-year-old makes an appearance, despite being regarded as one of the world’s best golfers, with 15 majors to his name.

“I can’t tell you how excited I am to be playing with Charlie in our first official tournament together,” he said.

“It’s been great watching [Charlie] progress as a junior golfer, and it will be incredible playing as a team together in the PNC Championship.” His son is starting to get into the sport, he told Golf TV. “He’s starting to understand how to play. He’s asking me the right questions. I’ve kept it competitive with his par, so it’s been just an absolute blast to go out there and just be with him. It reminds me so much of me and my dad.”

His dad, Earl, always waited for Tiger to ask him to play, and he’s now taking the same approach with his son.

Charlie, whose mom is Tiger’s ex-wife, Elin Nordegren – whom he famously cheated on, is fairly new to the high-profile golf scene. The most television exposure he’s received up to now was last year at Augusta National when Tiger wrapped him in his arms after winning the Masters for the fifth time.

The pro golfer was completing a comeback from four back surgeries. It was his 15th major – but the first his son saw him win. 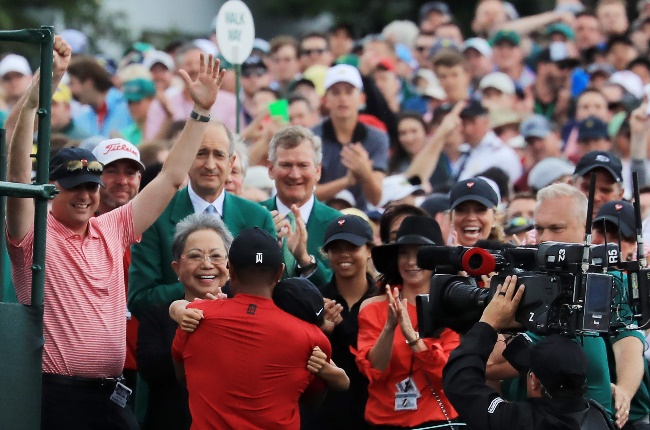 Tiger Woods wraps his arms around his son after winning the Masters for the fifth time (Photo: Gallo Images/ Getty Images)

Having fun with his son at the PNC Championship could be a good way for Tiger to move past the disappointing end to his 2020 PGA Tour season.

He wrapped up 2019 with an eventful Sunday in the Masters. After winning the Masters, he managed only a 38th-place finish at Augusta National recently.

We live in a world where facts and fiction get blurred
In times of uncertainty you need journalism you can trust. For 14 free days, you can have access to a world of in-depth analyses, investigative journalism, top opinions and a range of features. Journalism strengthens democracy. Invest in the future today. Thereafter you will be billed R75 per month. You can cancel anytime and if you cancel within 14 days you won't be billed.
Subscribe to News24
Related Links
Tiger Woods’ mistress Rachel Uchitel breaks her silence on their sex scandal
Golf’s next big star? Tiger Woods’ son comes out swinging to win tournament
Next on You
Kim Kardashian's kids could be a howling success when they join her in Paw Patrol sequel