Naked pictures and bizarre rants: why fans are worried about Britney as her conservatorship winds down 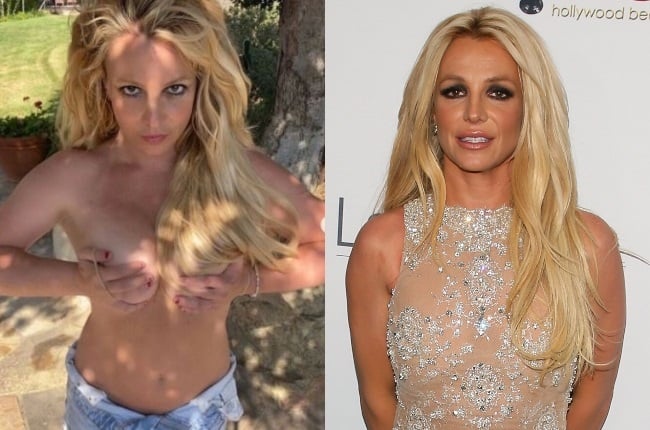 Concern for Britney Spears' mental state is growing as she floods her Instagram with topless snaps, and is accused of assault by her housekeeper. (PHOTOS: Gallo Images / Getty Images / Instagram / @britneyspears)

Fans rejoiced when the order came through: Jamie Spears was no longer going to have a stronghold over his daughter's life.

Earlier this week a Los Angeles judge suspended Jamie as conservator of the Britney Spears' estate, which he has controlled for 13 years, and set the stage for ending the conservatorship altogether.

But no sooner had the order been made public than Britney was doing what Britney has often done in the past: baring it all.

And some of her fans are left scratching their heads all over again.

The pop icon celebrated her legal victory by sharing a series of naked snaps whilst holidaying in the Pacific with fiancé Sam Asghari (27).

Another wrote: "I wish the free Britney was just a little classier than this."

In a separate video posted moments prior, meanwhile, the 39-year-old musician appeared topless in the ocean and was also seen relaxing on a boat with her fitness instructor beau.

It's hardly the first time Brit's more than 34 million Instagram followers have expressed concern over her risqué social media snaps.

In July the Toxic singer got people talking after posting a series of saucy photos to her social-media accounts.

In a now-deleted video, the Crossroads actor poses and twirls with her hands over her breasts, wearing just bikini bottoms and red-heeled boots.

“I will let you guys know very, very soon all my favourite clothing designers and will make sure I'm clothed head to toe,” she joked before going off on a tangent.

“Considering the spread of covid is less of a threat we can now be diligent civilized people and safely go about our mundane ways for the most part,” she wrote.

Britney is known for sharing some rather odd Instagram posts which fans have taken as clues and secret messages. But many were stumped when they saw the topless images.

One fan admitted they found the post “really awkward and uncomfortable”, while another wrote it “makes no sense” to them.

“Who else is straight up concerned?” asked another.

Brit eventually deleted the post but later returned to the platform to upload more topless images, one of which showed her sporting a pair of denim cut-offs.

This time she offered her detractors a lengthy explanation for her racier Instagram posts.

"I bet you're wondering why I'd expose my body now. Well, it's because I was born into this world naked and I honestly feel like the weight of the world has been on my shoulders and it's made me view myself that way," she wrote.

"I wanted to see myself in a lighter way, naked. I am a woman, a beautiful sensitive woman who needs to look at myself in my purest form."

Along with her newfound body positivity Brit has recently made great strides in her highly publicised fight to end her conservatorship, which has seen her father controlling her life and finances for the past 13 years.

Earlier this month a Los Angeles judge suspended her 69-year-old father as conservator of the star’s estimated $60 million estate.

Although the songstress did not take part in the hearing herself her parents were dialled in remotely but did not speak.

“I do believe that the suspension of James Spears as conservator…is in the best interest of the conservatee,” Penny said, referring to Jamie’s birth name.

“The current situation is not tenable. It reflects a toxic environment, which requires the immediate suspension of Jamie Spears today.”

After the ground-breaking verdict was announced Britney’s lawyer, Mathew S. Rosengart, said Jamie’s removal was the first step toward ending a “Kafka-esque nightmare” for his client, adding that she “has been abused by this man not only for the past decade, but since her childhood”.

As Jamie prepares to exit the arrangement, John Zabel, a certified public accountant handpicked by the Womanizer crooner’s team, will temporarily succeed Jamie as a fiduciary and interim conservator of her estate.

The Crossroads star also remains under the care of Jodi Montgomery, a licensed private professional fiduciary who serves as co-conservator and manages her medical and personal affairs.

A court hearing to determine whether the conservatorship arrangement should be terminated altogether is set for 12 November followed by another court date, on 13 December, to tie up loose financial threads.

We live in a world where facts and fiction get blurred
In times of uncertainty you need journalism you can trust. For only R75 per month, you have access to a world of in-depth analyses, investigative journalism, top opinions and a range of features. Journalism strengthens democracy. Invest in the future today.
Subscribe to News24
Next on You
Jennifer Lawrence's baby bump makes a dazzling red carpet debut