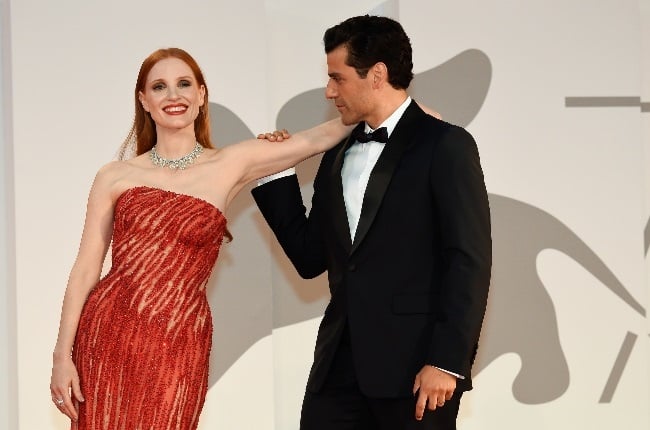 It’s not what you think – or so Jessica Chastain claims.

The 44-year-old actress and actor Oscar Isaac had tongues wagging recently with their piping hot red-carpet chemistry at the Venice Film festival.

Dressed in an elegant red dress, Jessica posed for images alongside the 42-year-old actor who looked dapper in a black tux.

The Scenes from a Marriage co-stars sent many online users into a frenzy with their playful PDA, during which he wrapped his hands around her waist and Jessica unhesitatingly leaned into his arms.

The cherry on top of their eyebrow-raising interaction was a slow-motion video of Isaac pecking Jessica’s arm before she turns to embrace him.

Yet it seems there’s little more between them than close friendship. They’ve been pals for 20 years, Jessica says, and went to college together.

She adds they’re both happily married to other people and the red-carpet closeness was all for show and a way of hyping up their new series. Jessica reassured fans that it was all an act and there was nothing romantic happening between her and Oscar. (Photo: Getty Images/Gallo Images)

“We're both married to other people, we've been friends for more than 20 years. If it hasn't happened yet, it's not gonna happen,” she says.

Jessica has been married to Gian Luca Passi de Preposulo (39), for four years and the couple share three-year-old daughter, Giulietta. Oscar is wed to Elvira Lina (40), a Danish writer and producer, and they have a four-year-old son, Eugene. Jessica with her husband, Gian Luca Passi de Preposulo, who she has been married to for four years. (Photo: Getty Images/Gallo Images)

Jessica also addresses the slow-motion footage, “It's a slow-motion, it's slow-motion! And I'm looking straight ahead,” she says in her defence.

“I didn't even realise what he was doing until the photographers laughed. My left arm is a bit jealous of my right,” she jokes.

This isn’t the first time the pair has worked together – they starred in 2014’s A Most Violent Year.

According to Jessica, working alongside Oscar helped her prepare for her role.

“I knew there was going to be something about it that would be freeing because I wouldn't have to be muscling and doing a lot of work. We affect each other, and so we don't have to plan what we're going to do.”

Jessica describes working with her costar like surfing. “It's a special thing, and it's very rare to have it with another actor. We have it with each other.”