What the heck, Mom! Why Emma Roberts blocked her mother on Instagram Moms can be great – we all know that. But they can also get it wrong sometimes – especially, as Emma Roberts found, when it comes to things internetty.

In August the 29-year-old actress discovered she was expecting her first child with boyfriend Garrett Hedlund and had hoped to keep the happy news private for as long as possible. But she hadn’t reckoned with one excited granny-to-be – her mom, Kelly Cunningham, who kind of blew things for her daughter on social media.

“I was keeping my pregnancy pretty low-key, but unfortunately my mother has Instagram,” Emma recently told talk-show host Jimmy Kimmel.

Her mom, she explained, had been using a flip phone for years and Emma decided it was time for her to upgrade to a smartphone – little realising it would be to her own detriment.

“Mothers and Instagram, it's a bad combination,” she said. “She definitely spilled the beans. [Buying her an iPhone was] the worst thing I ever did!”

First Kelly set up a Google alert of her daughter to keep track of every time Emma was mentioned online. “So I was getting flooded with 'is this true?' and 'have you seen this and that?’” Emma says.

Then Kelly dropped the pregnancy bomb – although in her defence there were extenuating circumstances. A tabloid came out claiming Emma was expecting and Kelly assumed her daughter had spoken to the outlet.

“It was a disaster,” Emma told Jimmy, adding that she was mid-flight when the news broke and couldn’t confront her mother.

“I couldn't get to her. I couldn't call her or attack her!”

As a result of the faux pas, Emma decided to block her mother on Instagram.

“We kind of laughed. We kind of got into a fight. I blocked her at one point. [But it’s a] good story to tell the baby,” she says. 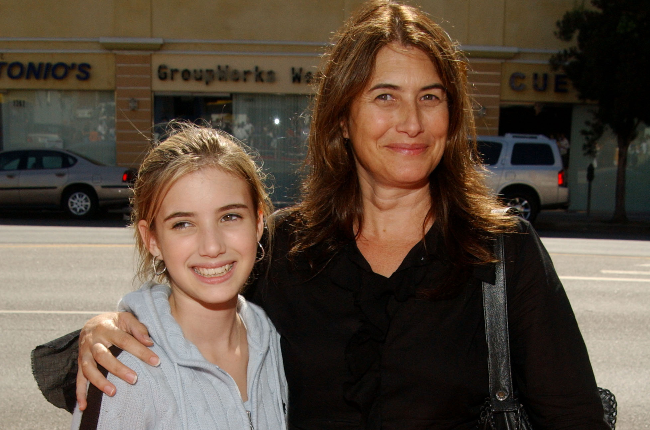 Emma Roberts when she was young and her mother, Kelly Cunningham (Photo: Getty Images/Gallo Images)

During the interview Emma also shared the gender of her baby. “I was convinced I was having a girl to a point where I said to my boyfriend, ‘If it's a boy you can name it’.”

But guess what? It’s a boy! Better get those name books out, Em.

We live in a world where facts and fiction get blurred
In times of uncertainty you need journalism you can trust. For 14 free days, you can have access to a world of in-depth analyses, investigative journalism, top opinions and a range of features. Journalism strengthens democracy. Invest in the future today. Thereafter you will be billed R75 per month. You can cancel anytime and if you cancel within 14 days you won't be billed.
Subscribe to News24
Related Links
Cute alert! Roxy Burger welcomes baby No 2
Why Princess Eugenie will refuse a title for her baby if the queen offers it as a gift
Better late than never! Sophie Turner finally shares her preggy pics
Next on You
Filming Harry Potter was suffocating but Rupert Grint still wants his daughter to love Ron Weasley