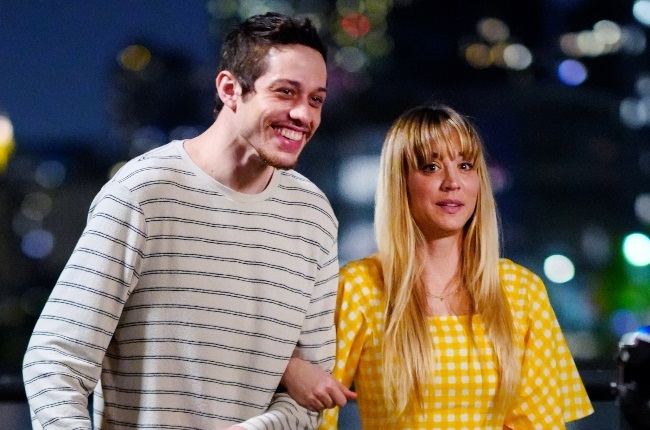 A romance is reportedly blossoming between Kaley Cuoco and comedian Pete Davidson just week after her marriage fell apart.

The pair are set to star in the upcoming romantic comedy Meet Cute, in which they play two people who fall madly in love – and it’s starting to look like life may be imitating art.

The Big Bang Theory actress shocked fans by filing for divorce last week from equestrian Karl Cook (30), her husband of three years. They released a statement, saying they’d chosen to separate as their "current paths" have taken them "in opposite directions".

Just prior to that Saturday Night Live comedian Pete split from Bridgerton star Phoebe Dynevor (26), citing the pressures of distance and conflicting schedules.

At the time, sources claimed Pete’s growing friendship with Kaley had played some part – but at that point, in public at least, she was believed to be happily married.

But it now seems there was more to both splits than meets the eye.

Sources close to the production of Meet Cute claim Kaley (35) and Pete (27) became very close during filming and this was a contributing factor in Pete breaking up with Pheobe. The pair appear as Sheila and Gary in the upcoming film, which has been described as a romcom with a splash of time travel. (PHOTO: Gallo Images / Getty Images)

“Now that Kaley has announced the breakdown of her marriage, those around them on the set of Cute are saying they saw it coming,” a source says.

“Pete and Kaley have got on incredibly well since day one, but as the weeks have passed it’s become clear there’s some attraction there.

“Obviously they play a couple in the film and it’s all very romantic and sweet, but the chemistry between them is so palpable it’s all people could talk about on set,” the source continues.

“When the cameras stopped rolling, they’d be cracking jokes and were clearly enjoying one another’s company.“A friendship has definitely been formed between them and they seem very tight.”

Just 24 hours after announcing her divorce, Kaley was back on set filming Meet Cute with Pete. Days later the pair were caught leaving Italian hotspot Lilia in Brooklyn, New York.

An eyewitness told gossip site Deuxmoi that Kaley and her rumoured rebound were with friends but chose to sit extra close to one another.

"Pete Davidson/Kaley Cuoco and 2 friends spotted at Lilia Restaurant in BK," the insider dished on social media. "Saw them outside then ate six tables down from them. Kaley and Pete sat on the same side of the table."

Filming on the project has since wrapped but insiders seriously doubt they’ve cut ties.

“Kaley and Pete have bonded a lot while filming, so much so that they’ve become very good friends,” a source says. “They’re very supportive of each other and there’s no doubt they’ve been staying in touch post-filming.”

The film is set for release next year.

Meanwhile Kaley and Karl, the son of billionaire businessman Scott Cook, are working towards finalising their divorce as quickly as possible. Kaley and Karl announced earlier this month, in a joint statement, that they “have realised that our current paths have taken us in opposite directions." (PHOTO: Gallo Images / Getty Images)

Neither are seeking spousal support, but Karl wants back "miscellaneous jewellery and other personal effects" as well as his own "earnings and accumulations" that he made before and throughout their separation. Other assets will be divided as set forth in their prenup.

"She has a big career and puts that first in her life," an insider says. "It's basically a [matter of] growing apart and each pursuing separate interests."

The source also adds they haven't spent that much time together recently.

"She has a lot going on in her career now and she loves her work. Their relationship is just following different paths. A marriage doesn't work if you rarely see the other one."