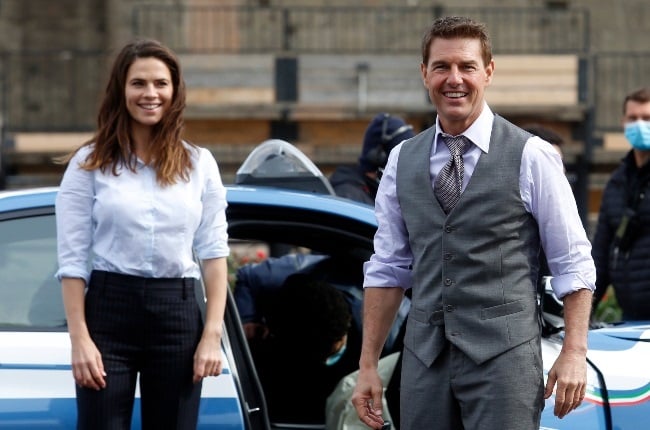 It seems the relationship was Mission: Impossible.

After reportedly dating for a year, Tom Cruise and Hayley Atwell have gone their separate ways.

Apparently, things between the action hero and his co-star soured recently but Tom (59) and Hayley (39) are continuing to work together as production on their upcoming movie rolls on.

Romance blossomed between the pair during filming of the seventh instalment of the Mission: Impossible franchise, which had been delayed due to the coronavirus pandemic.

But despite the Top Gun star and British actress being “inseparable” at one point, insiders say they’ve now agreed to just be friends.

“It has been a very intense period of filming together,” a movie insider says. “They really got on well – and they’re obviously both very good-looking Hollywood stars so it made for a good match.

“But as the latest film winds down they’ve decided to go back to being friends.

“Their filming schedules are very full-on, and Tom has a number of other commitments coming up and is always shooting around by private helicopter and jet, so it just ran its course.

“But they’re still happy to work together. It’s a shame, but just one of those things. They still get on well.”

Rumours of romance between the two first popped up in December when they were seen holding hands at a London screening.

“Tom and Hayley hit it off from day one. Lockdown and all the difficulties that came with it brought them even closer together and they’ve become fairly inseparable," a production source told The Sun at the time.

“They get on brilliantly and both seem very happy.” Tom and Hayley made a glamorous pair at the Wimbledon tennis finals and were spotted smiling and chatting while watching the action on the court. (PHOTO: Gallo Images / Getty Images)

Their romance appeared to be heating up after the pair attended several high-profile events, including a trip to Wimbledon to watch the women’s singles final in July.

Regardless of whatever drama did or didn’t occur between Tom and Hayley, they’ll still be spending time together in the not-too-distant future.

They’ll probably reunite to help promote Mission: Impossible 7 before it premieres in September 2022. Hayley – whose character is known only as Grace – is set to reprise her role in Mission: Impossible 8, which is expected to hit theatres less than a year after its predecessor.

Hayley is currently best known for playing Peggy Carter, the love interest of Steve Rogers (Chris Evans) in Captain America, and also had roles in Cinderella and Christopher Robin.

The Brit was Tom’s first longish-term partner since his 2012 split from Katie Holmes (42). Hayley is said to have split from her British doctor partner in 2020 before getting close to Tom.