Riaan Cruywagen has retired in a beautiful home by the sea, filled with souvenirs which carry stories of his impressive career. (PHOTO: ER Lombard)

Approaching Mossel Bay on the N2, you’re met with a billboard advertising retirement villages and sporting a familiar face: “As recommended by Riaan Cruywagen . . . the perfect solution for those who wish to retire by the seaside.”

As marketing strategies go, it's not too bad because his face still one of the most recognisable even though it's years since he ended his time with the SABC.

We’re chatting to Riaan (76) in the home he and his wife, Riana, bought for their retirement in Mossel Bay, in the Western Cape.

But he doesn't feel like his quite ready to sit and watch the waves roll in without doing anything else. Despite more than 9 000 news broadcasts over 22 years, he says the word retirement simply doesn’t make sense to him.

“I deeply enjoy my work as a broadcaster and see it as a privilege, not a punishment. I might think of retiring once I’ve mastered the art of broadcasting but that’s hard to imagine, because I’m still learning!” 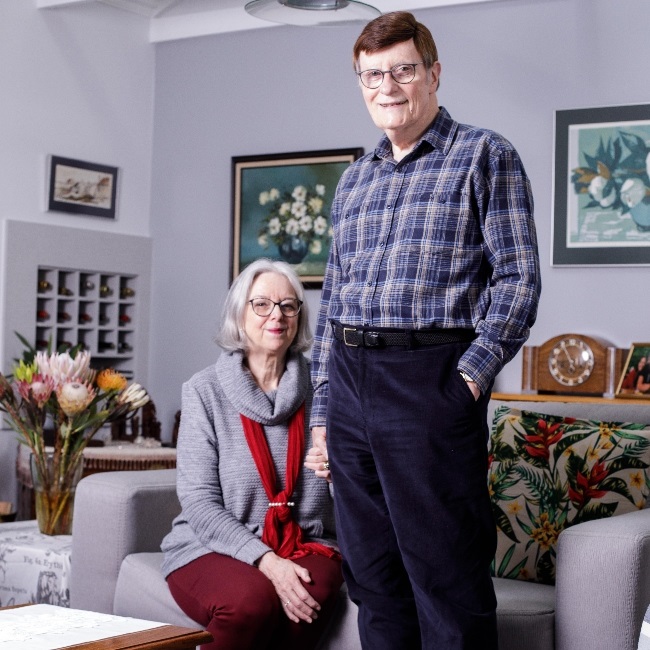 Riaan and his wife, Riana, enjoy their time in their peaceful retirement home. (PHOTO: ER Lombard)

“Each time, it was goodbye but not farewell. I might’ve stepped down but I didn’t retire, rather choosing to take on new challenges.”

These include a TV show for retirees which he’s been presenting for the past five years. Before the pandemic, he travelled to Joburg for two days every month, but remote work has now become the norm and he records everything in a studio in Mossel Bay.

“If I didn’t continue working, I wouldn’t be making a meaningful contribution to my profession anymore. I started broadcasting 57 years ago. How do you stop that momentum? Not easily.”

His lasting fame has led to many jokes but Riaan isn't fazed by the many T-shirts and memes bearing his face, joking about how he's been around forever.

“I probably own the copyright to my face, but whatever. As long as people enjoy it.”

He has a sense of humour about it all. “I enjoy stuff like that immensely. It’s good to break out of your mould every so often, to show people you’re not just a talking face on TV. You’re also a human being with a sense of humour.”

Years ago he showed his human side. The video of Riaan struggling to control his laughter while reading a news snippet about a frog-jumping competition in the US has had more than 300 000 views on YouTube.

“When that was broadcast, every phone in the studio was ringing off the hook. People were calling in droves to say how much they’d enjoyed it. There wasn’t a single complaint.”

These days his schedule is so packed that it ages to find time to do this interview with Riaan. But he doesn’t like being called a star.

“I think ‘shooting’ star is closer to the truth,” he says as we chat over fresh coffee and milk tart.

His life is calmer these days, he says, away from Johannesburg’s “mad rush and traffic jams”.

“I’m able to manage my time more effectively now and plan my activities better. We make time to go for walks on the beach, attend music concerts, braai with friends or explore the countless beautiful spots along the Garden Route.”

The home, which has both an inside and outside braai area, is full of mementos of a long career and life, including the variety of neckties he collected during his career. “I’ll have to count them. I had about 300, but after my TV news days ended, I got rid of a whole lot.” Among his picture collections are framed images of the different cars he and Riana drove in the US and the Netherlands. (PHOTO: ER Lombard)
One of the key ingredients to his enduring success on screen was his adaptability to political change and transitions, Riaan says.

“You know, when I was at the radio, it started with Dr HF Verwoerd. Since then, I’ve lived through all of them on TV, from John Vorster, PW, FW and Nelson Mandela to Thabo Mbeki – everyone from H to Z to Zuma,” he explains.

“For my own sanity, I distanced myself from office and country politics. I never wanted to taint myself with politics. If you want to maintain your credibility and dependability as a journalist, you can’t get involved in politics as some of my colleagues have done. You’re playing with fire.” It’s hard to believe his dream hadn’t always been to work in broadcasting. If he’d had a say in the matter, he’d be a Boeing pilot, Riaan says.

“I was enchanted by the large air machines flying above Johannesburg,” he recalls. But in those days, his eyesight wasn’t good enough to become a pilot."

Fortunately for TV fans, it was the airline industry's loss and TV fans' gain.