First, it was ballet, then pole-dancing and now he has gone drag! SA funnyman Siv Ngesi has embarked on a journey of redefining what masculinity means to him. And he couldn’t care less about trolls and naysayers.

Taking to Instagram this week, Siv introduced his drag character with a video which he captioned “I’m every woman”.

“It's just about reinventing and redefining what masculinity means to me,” he tells YOU.  “Just because I put on a dress and makeup or nail polish it doesn't make me less of a man. I’m continuously doing it and f***k what people think. It has nothing to do with me.”

Since December, Siv has been challenging himself to try more feminine sport and art forms. He started off by taking pole-dancing lessons with his friend, Leda Botha, and later went on to give ballet a whirl, donning a full tutu and ballet shoes. From the facebeat down to the hips, Sivanna stands feeling confident about the transformation (Photo: Ryan Jonathan)

This time he’s turned his attention to drag and it’s been liberating he says. It took nearly three hours to get the look: gluing Siv’s eyebrows flat, shaving his beard and even tucking in his genitals.

“I love my beard so shaving it was the biggest sacrifice. I realised that when you do drag you either go all in or don't do it at all. So I did it and I'm really, really proud.”

Then there was the process of designing his dress and buying his makeup and shoes, but he’s no stranger to teetering on high heels.

“Heels are nothing new to me. I grew up with two older sisters, many female cousins and a mother. Then at Strictly Come Dancing I had to dance in heels. But, honestly I don't know how women manage heels because my calves are sore and my toes are in pain,”

Cape Town-based drag queen Manila von Teez, who helped Siv with the transformation, made sure he got the full drag experience,

“While I was walking around in heels during the shoot Manila said I should keep them on to feel the pain and the process of drag. It's not comfortable being a woman and it's not comfortable being in drag, but it was definitely liberating and empowering. I felt like a different person. Working with Manila is really incredible. No one else will ever touch my face except for Manila as we create and develop this character. We're gonna blow minds.” 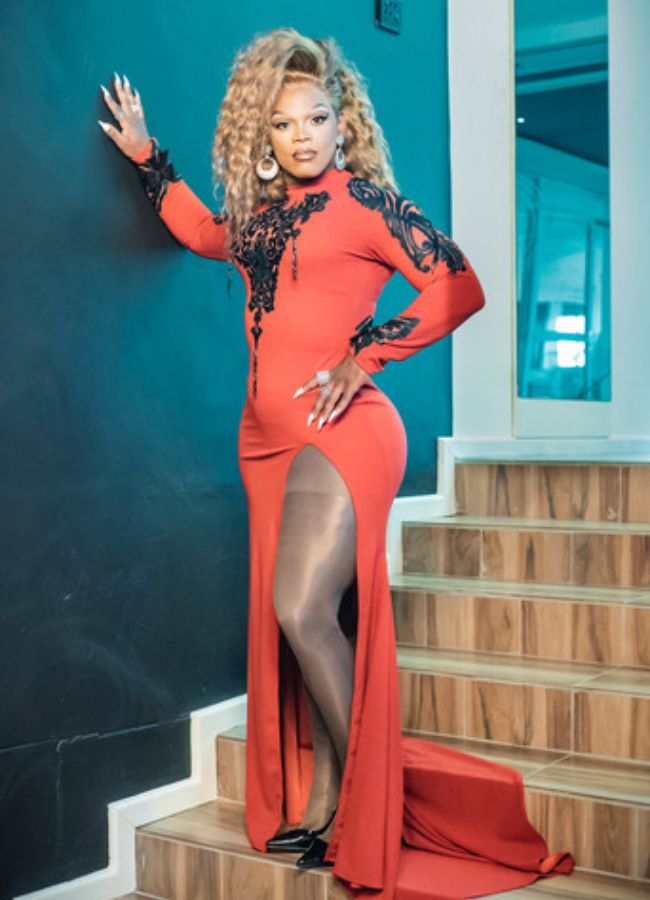 Siv Ngesi has always wanted to be involved with drag and his transformation was breathtaking (Photo: Ryan Jonathan)

Siv turned to his followers to help him name his drag character and they came up with The Queen Sivanna, which is a word play on the cider drink Savanna, and the isiXhosa word Siyavana, which means “we get along”.

But don’t confuse Siv Ngesi with Sivanna, the comedian warns,

“When I put on the heels and I put on that makeup, it's not Siv anymore, it’s Sivanna.”

When he video-called his close friends and family members to give them a glimpse of his new look, they were flabbergasted.

“I called my best friend, Nompakamiso, and she went crazy. I then called [Springbok captain] Siya Kolisi, who's practically a family member. He didn’t believe it was me. I called [former Top Billing presenter] Janez Vermeiren. He also didn't believe it was me,” he laughs.

“I then called my sister and my niece and they were just completely blown away. They are very supportive. And I called my mother. She couldn't believe it. She was like, ‘Who is this?’

After having such a blast playing dress-up, Siv says this will be the first of many drag experiences.

“It was really fun. I look forward to doing it again.”

READ MORE: Catch up with Siv Ngesi about his new gig Braais & Boys

We live in a world where facts and fiction get blurred
In times of uncertainty you need journalism you can trust. For only R75 per month, you have access to a world of in-depth analyses, investigative journalism, top opinions and a range of features. Journalism strengthens democracy. Invest in the future today.
Subscribe to News24
Related Links
5 things you didn’t know about Siv Ngesi
Adorable! Celebrity first-time dads share cute moments with their kids during lockdown
From luxury whips to designer bags – we look at some of the most expensive local celeb buys
Next on You
Minki van der Westhuizen on Christmas with her 3 girls, life in lockdown – and how she keeps her fabulous figure