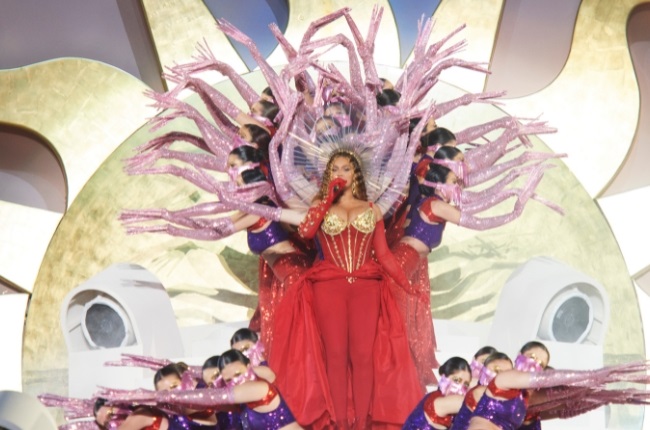 Beyoncé in a private performance at the Atlantis The Royal on Saturday. (PHOTO: Getty Images)

Thando Thabethe, Rich Mnisi and Maps Maponyane were among the 300 guests invited to Beyoncé's Dubai concert, her first in four years – but the event was not without controversy.

Bey was the headliner at the unofficial opening of the Atlantis The Royal luxury resort in Dubai this weekend, but some fans and activists have slammed her for performing in the UAE nation where same-sex relationships are a crime, punishable by death.

Beyoncé's last album, Renaissance, has been celebrated for "honouring black queer culture" and taking inspiration from LGBT icons, by paying tribute to dance music that emerged from the gay community and references 1800s drag ballrooms in Harlem, New York.

Some fans have been left feeling uncomfortable that the singer would make her live return in the Islamic nation that doesn't recognise LGBT rights – something Queen Bey has yet to comment on.

Three South Africans were part of the weekend’s festivities, though, and took to Instagram to share snippets of their experiences.

Radio personality and entrepreneur Thando wore a pink jumpsuit with a ruffled detail from Maryzo for the show.

She accessorised with a gold handbag and a pair of clear heels. In an Instagram post she wrote, “Best night of my life,” with a bee emoji.

She also posted a selfie with Bey’s mother, Tina Lawson, in what appeared to be the hotel lobby.

The local celeb was seen partying it up from start to finish, and there’s no question about whether she had a good time or not.

His first outfit was a brown and gold Gucci suit.

His outfit for the performance, a white Rich Mnisi suit paired with a corset and silver bag, was captioned, “Halo don’t fade away".

Actor Maps shared snippets of the weekend on his Insta stories too. He wore a blue Brommon Atelier suit and a Maxhosa hat to the performance. Only 300 guests – including celebrities, journalists and influencers – were invited to the Dubai show.

The invitation read, “Beyoncé invites you to a weekend where your dreams become your destination. You and a guest are invited for epicurean feasts, beachside indulgences and special reveal experiences, including business-class airfare, first-class ground transportation and first-class accommodations at Atlantis The Royal".

The resort, which has been under construction for eight years, is billed as "the most ultra-luxurious experiential resort in the world". Rooms are priced from R140 000 a night.

The hotel is set to officially open on 10 February.

Queen Bey, who was paid a reported $24 million for the one-hour show, performed outdoors, with 48-member all-female orchestra Firdaus and all-women dance troupe the Mayyas.

The show featured her greatest hits but nothing from Renaissance, and her eldest daughter, Blue Ivy Carter, shared the stage with her for a performance of Brown Skin Girl.

No pictures or videos were allowed while Beyoncé performed, and guests were asked to surrender their phones.

“We will be messaging you towards the end of the show to let you know when you can capture the grand reveal," the audience was told, but that didn't stop leaked videos and pictures of the show making their way online.

We live in a world where facts and fiction get blurred
In times of uncertainty you need journalism you can trust. For 14 free days, you can have access to a world of in-depth analyses, investigative journalism, top opinions and a range of features. Journalism strengthens democracy. Invest in the future today. Thereafter you will be billed R75 per month. You can cancel anytime and if you cancel within 14 days you won't be billed.
Subscribe to News24
Next on You
EXCLUSIVE: Shock for former Miss SA Claudia Henkel as husband 'marries' before their divorce is finalised