Cape Town - It seems there’s no stopping Queen B once she’s on a roll!

Local media personality Bonang Matheba dazzled as host at the centenary celebration dinner for Nelson Mandela, which took take place at the Rosewood hotel in London on Tuesday night.

And now the Being Bonang star will again impress with her skills at this year’s Miss South Africa pageant on 27 May.

Bonang took to Instagram on Thursday morning to make the announcement.

“Very exciting . . . I’ll be your host for the 2018 Miss South Africa pageant sponsored by @cellcsa on May 27th! This is gonna be fun!” she captioned the post.

The pageant will be held at Sun International's new flagship Sun Arena at Time Square in Pretoria and will be televised live on M-Net.

The winner will take home more than R2 million in prizes.

has a long association with Miss South Africa and was part of the judging panel in 2014 which officially crowned Rolene Strauss, who later went on to be crowned Miss World.

She says she is delighted to be hosting the 2018 event.

“Having grown up watching the Miss South Africa pageant, I feel very honoured to be part of this two-hour spectacular in a year in which this South African institution celebrates a huge milestone anniversary.”

We live in a world where facts and fiction get blurred
In times of uncertainty you need journalism you can trust. For only R75 per month, you have access to a world of in-depth analyses, investigative journalism, top opinions and a range of features. Journalism strengthens democracy. Invest in the future today.
Subscribe to News24
Related Links
PICS: Inside Nomzamo Mbatha's elegant graduation party
WATCH: Zakeeya Patel shows off her sultry dance moves
WATCH: Vuyo Dabula giving his son a boxing lesson is the cutest
Next on You
Jamie Bartlett dishes on his new found love 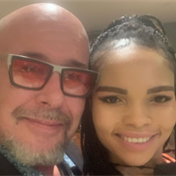