Nadia Jaftha and Trevor Lagerway on winning Tropika Island of Treasure: ‘We just complemented each other’ 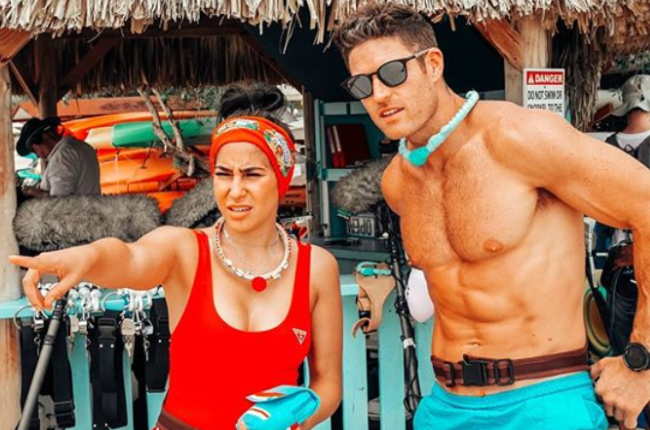 Each bagged half a million rand in last night’s finale.

“I’m pretty excited. It was a cool journey,” Trevor tells us.

“I mean my family and Daniella my wife knew [that I’d won] in December. They were just over the moon. Because of the time difference they were going to bed and we were just starting, so she’s like waiting to try and find out what’s happening. Me out in the middle of nowhere. When I phoned her she was just over the moon.

“Because it’s been lockdown it’s been a crazy, crazy situation. It’s taken a little bit of the joy and excitement away from the experience. “

Nadia agrees it was incredible to win.

“I was in disbelief for a good five seconds. I was feeling excitement, anxiety and complete euphoria. A feeling I can’t describe. A feeling that will stay with me for the rest of my life,” she said.

The pair have a strong bond and say the competition on the Dutch Caribbean island really solidified that bond.

Trevor explained his decision to pick Nadia as his celebrity partner.

“In the speed dating she said to me she’s hard-working, she’s resilient, if she puts her mind to something she goes after it 100%. She won’t complain even if times are tough so that was definitely something that stood out to me.

“We worked really well together, we just complemented each other. She didn’t give up and I pushed her because I’m competitive. So I kept pushing and she kept up. When it came to certain elements that I maybe wasn’t the greatest at she then covered [me] and vice versa. “

WHY DID YOU CHOOSE NADIA? .. This is a question Iv'e been getting a lot after episode 1 of @mytropika island of treasure aired last week Tuesday. . I won the first challenge and so I got the pic of the bunch. When you playing for a million rand there's a million things literally running through your head with every decision you need to make. It's not easy by any means. But what I can say is I tried to work through all the possibilities they could throw at me and who would compliment me the best throughout the competition. You will need to wait and see for tomorrow nights episode 2 to see if I made the right decision or not choosing @nadiajaftha ???? . . . . . . . #team #coolred #decisions #millionairemindset #millionbucks #choices #allornothing #gobigorgohome #winner's #winnersmindset #momo #competition #realityshow #tv #tvshow #muscle #aesthetic #beachlife #beachbody #tropika #guesssa

The pair hit a bump in the road when Nadia got the team disqualified just before the “recoupling”, but Trevor would have none of it, and chose Nadia as his teammate once again.

“The challenge before the recoupling, she didn’t do so well in the challenge and so she was really worried that because of that I wasn’t going to choose her again. But besides that challenge, she’s really pulled her weight,” he said.

Nadia said not knowing who her teammate was before the choosing really played a crucial role.

“Fortunately enough for me Trevor chose me. I honestly thought he would’ve gone with another strong male because it just makes sense.

“But for some reason he chose me, and he chose me twice. Even after I messed up, I got us disqualified.

“He’s a good example of when people are just good people and they want to be around good people. Trevor has a massive heart, I have a big heart and I think both of us knew we had good intentions and it was just easy for us to connect. And that came through in the games.”

The pair say they thoroughly enjoyed the competition and shared some of their highlights.

“The challenges in general for me,” Trevor says. “I’m so outdoorsy [so] being in the water was absolutely awesome. The whole experience was great, the specific highlights would be playing the challenges and immersing myself. And meeting and hanging out with all the people.”

The competition was difficult for Nadia but she thoroughly enjoyed it.

WE ARE THE CHAMPIONS!! First off, thank you so much to everyone for the love and support! You guys are the absolute best?? @nadiajaftha you were so incredible and the best parter I could ask for. @katlegomaboe you are one legend of a human and such a talented dude?? #tropika thank you for everything. What a mind blowing adventure. @healthylivingwithdaniella you are my biggest supporter, I ? you. Thank you Lord??. . . . . . . #win #winners #realitytvnews #best #teammates #happy #joy #excitement #victory #adventure #1million

“The overall experience was very much challenging [but] it was rewarding in its own ways. I cried a lot, I injured myself, I got stung by a jelly fish,” she said.

“Actually winning for me it was a big deal. It was a personal achievement in my own capacity and that’s something that will stay with me forever. “