Cape Town - He’s previously joked that he’s not a good cook – now Prince William has admitted he’s not strong in the arts and crafts department either.

During a recent royal engagement at The Passage, a London charity for the homeless, the 36-year-old father-of-three was asked to help prepare for a holiday party, US Weekly reports.

?? Joining @PassageCharity service users for an arts and crafts workshop to prepare cards and gifts ahead of the centre’s Christmas party next week. The Passage has helped over 130,000 people in crisis since its formation in 1980, and runs the largest Resource Centre for homeless people in the UK — today The Duke and Duchess of Cambridge heard from frontline workers about some of the challenges relating to street homelessness, including drug addiction and mental health issues.

While being tasked with cutting the letter “E” for a “Welcome to Christmas Dinner” banner he said his eldest son, Prince George (5), doesn’t think too highly of his talents.

“My son knows I’m useless at this,” he said as his wife, the Duchess of Cambridge, laughed. “Catherine is the artsy one.”

Living up to her reputation as a bit of a domestic goddess the Duchess helped to make beaded bracelets for the charity. “Charlotte would love making these,” she said, referring to her and William’s three-year-old daughter.

In another reveal, 36-year-old Catherine recently let slip George’s nickname for his dad while talking to fans during a recent trip to Leicester, England, E! Online reports.

“Kate said William was playing football with the children last night and one of them said, I think it was George, ‘Are you playing football tomorrow, Pops?’ ” Leicester City Football Club fan Fiona Sturgess told reporters, the Daily Mail reports.

We live in a world where facts and fiction get blurred
In times of uncertainty you need journalism you can trust. For only R75 per month, you have access to a world of in-depth analyses, investigative journalism, top opinions and a range of features. Journalism strengthens democracy. Invest in the future today.
Subscribe to News24
Related Links
Prince William and Kate bring holiday cheer to UK forces in Cyprus
The adorable nickname Prince George calls Prince William – it’s the sweetest thing ever!
'Prince William tried to save my son’s life'
Next on You
Oh la la! Lily Collins shines with new Emily in Paris character 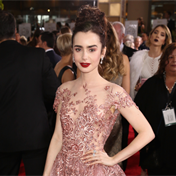