The Hollywood actress previously did an interview with As If magazine where she discussed the controversy surrounding her casting as a real-life transgender man, Dante “Tex” Gill, FOX news reports.

In the interview, the 34-year-old said that she shouldn’t be restricted in the roles she’s allowed to play, Indie Wire reports.

“You know, as an actor I should be able to play any person, or any tree, or any animal, because that’s my job and the requirements of my job,” she said.

In a video posted to The Daily Show YouTube channel, Trevor explains the issue he has with the Avengers star’s comments.

“We take for granted how much representation means to human beings, I think in two ways: one, in an inspirational front; but two, just how it shapes society,” he says.

He continues to attempt to explain what the actress – and many others – isn’t understanding about Hollywood representation.

Many also found Johansson’s comments inconsiderate following her track record of taking minority roles, USA Today reports. She controversially played a Japanese woman in the film Ghost in the Shell.

Scarlett later clarified her comments and accused the publication of misrepresenting her.

“The question I was answering in my conversation with the contemporary artist David Salle was about the confrontation between political correctness and art,” she said.

“I personally feel that, in an ideal world, any actor should be able to play anybody and art, in all forms, should be immune to political correctness.”

The 35-year-old South African-born comedian and TV host concluded by pointing out that he wasn’t attacking the actress, but that he was simply highlighting the frustration many people feel. “You [Scarlett] have the luxury of all these roles AND the roles that these other people will never be considered for . . . The Japanese woman who’s acting, she most probably can ONLY play the Japanese robot.”

Related Links
PICS: Miss SA top 16 join the First Lady to give back on Mandela Day
Miss SA remembers Johnny Clegg: 'He was a universal man who bridged worlds'
WATCH: Celebs walk the red carpet at The Lion King SA premiere
Share
Next on You
5 times guests on Ellen’s show were visibly uncomfortable 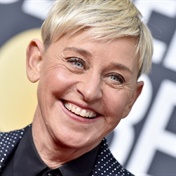