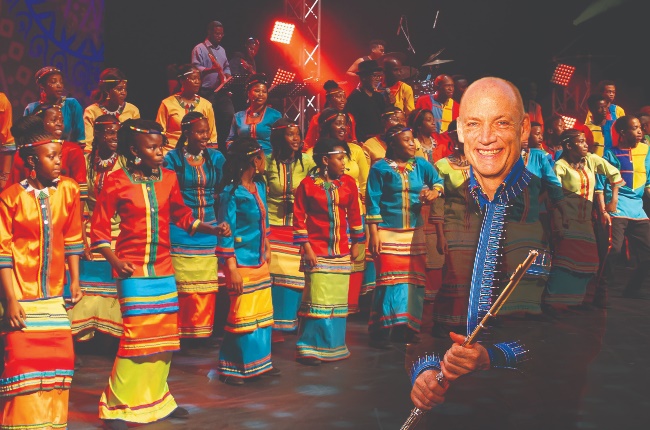 While we're able to stay safe at home, there are heroes dressed in scrubs that put their lives at risk every day by working on the medical frontline.

To honour and pay tribute to these health workers, the Mzansi Youth Choir and Grammy award-winning flautist Wouter Kellerman have collaborated on a cover of Miley Cyrus’ The Climb. They felt it was the perfect song to describe the character and resilience of healthcare workers worldwide.

“You can’t do much during the lockdown, it’s tricky but you have to think outside of the box,” the musical director of the choir, Sidumo Nyamezele, tells YOU.

“The new normal forces you to venture into different spaces . . . it’s exciting because we get to think differently.”

Although Wouter Kellerman has previously performed with the choir at corporate events, he says he’s always wanted to do more with them but their respective schedules haven’t allowed it until now.

“When the lockdown happened, we suddenly had time to do some recording even though it was a bit challenging to do it separately,” Wouter tells us.

“The kids are just wonderful, they do music because it drives them, it comes from the heart. I learnt from them and they learnt from me too, I love their passion and their energy.”

Wouter went on to say that the tribute was made more special because his sister, Dr Ronel Kellerman, is also an essential worker.

“I see first-hand the sacrifices they make and the risks they take. I see how hard she works night and day, but she’s very much invested in her wellbeing luckily,” he went on to say.

“Africa is not just a place. It is a feeling. Africa is the heart of the world and there are only a few of us who have been touched by her. Africa defines our soul and people can feel it, people just know…” Here’s one of our favourite performances to celebrate Africa Day 2020 – the annual commemoration of the foundation of the Organisation of African Unity on 25th May 1963. Celebrated in various countries on the African continent, as well as around the world, this year we can unite Africa amid the Covid19 pandemic with beautiful songs and memories! #AfricaDay #AfricaDay2020 #MYCSoweto #SowetanExcellence ?? LINK IN BIO ??. https://www.facebook.com/MYCSoweto/videos/259026285454481/

As the world has now gone predominantly virtual, this collaboration had everyone involved exploring technology as their rehearsals and performances were virtual too.

“We sent the different voice parts to the choir to make the brief clear for each choir member, we had to be very clear with the instructions and time frames with the choir,” Sidumo explained.

“It’s quite a tedious process but once it is done it’s impeccable but we do manage to do demonstrations as if we’re on a normal rehearsal space.”

What makes this cover of The Climb even more special is the fact that choir members used their phones to record vocals.

“They use phones, the level of commitment is so beautiful, some of them would borrow their family members’ phones. We communicate via WhatsApp, that’s how they send the material back to us,” Wouter said.

“It’s really complex to put it together but this is a challenging time for our creativity. We’re discovering new things and staying positive.

“It’s very very challenging, from the flute point of view it's fine because I have my studio at home but we can’t record together.”

Since heartwarming tribute was posted on YouTube, it’s garnered more than 85 000 views with many not just relating to the song but also captivated by the mellifluous vocals of the choir and Wouter’s flute.

As we speak to Wouter, he’s in the studio working on his second classical album and reveals that he aims to create uplifting music for the world.

“I always try and make uplifting music, that’s sort of part of the reason why I make music, and to create something beautiful that will touch people’s hearts. So in these times we need to add more positive energy to the world,” he said.

Following the Mzansi Youth Choir recently winning an Interkultur award in the choirs with accompaniment category for their video submission of A Million Dreams, Sidumo says he couldn’t be prouder of the hard work he’s seen the choir put in and is looking forward to taking more strides with them.

“What’s so beautiful about music is that it gives you courage and inspires you to do more, and the song is very relevant to what they [health workers] do and risk their lives for,” he said.

“When they hear a little voice somewhere appreciating what they do, they could get comforted and find courage to wake up and do it all over again

“We’re in actual fact giving them new fuel to stand up the following day.”