Hillary Clinton's first work of fiction is due out in October. (Picture: Gallo Images/ Getty Images).

Think back - what was the bestselling adult novel of 2018? It was Bill Clinton's thriller The President Is Missing, which he penned with bestselling author James Patterson. Now his wife, Hillary Clinton, is aiming to stamp her mark with her own thriller which she is writing with Louise Penny.

It was recently announced that the book, State of Terror, will hit the shelves in October. The women are longtime friends so the collaboration makes sense and as a former secretary of state and first lady, Hillary will bring a depth knowledge to the writing process.

Her husband's 2018 collaboration with Patterson, which shines a spotlight on the inner workings of America's highest office, was praised for its authenticity and no doubt Hillary and Louise will be aiming to do the same.

"Writing a thriller with Louise is a dream come true," Hillary says. "I’ve relished every one of her books and their characters, as well as her friendship. Now we’re joining our experiences to explore the complex world of high stakes diplomacy and treachery. All is not as it first appears."

Louise, who hails from Canada, admits that when she was offered the chance to collaborate with Hillary she could not say yes fast enough.

"What an incredible experience, to get inside the State Department. Inside the White House.  Inside the mind of the secretary of state as high stake crises explode. Before we started, we talked about her time as secretary of state. What was her worst nightmare? State of Terror is the answer." 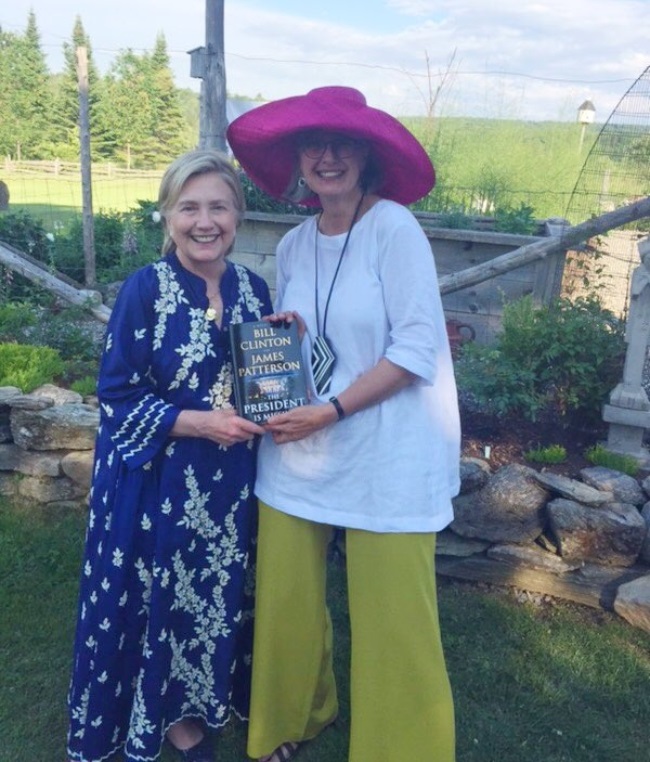 Back in 2018, Hillary shared this pic of her and Louise with an early copy of Bill's book. Was this the moment they decided to collaborate?

And it seems that their publisher is very happy with what they are planning to deliver.

"State of Terror is as exciting a proposal for a global thriller as I have ever read," Pan Macmillan spokesperson Jeremy Trevathan says. "The scope, ingenuity and ambition reflects the strength of the creative chemistry that exists between Hillary Clinton and Louise Penny. It’s a unique pairing of global real life experience at the highest level and brilliantly honed narrative craft.

"The characters, their nuanced backstories and the tense, all-too-believable plot leap off the page. This is emphatically a story for our times and we are confident it will establish itself as a bestseller for years to come, read both by thriller fans and by Hillary Clinton’s and Louise Penny’s legions of admirers around the world."

On her Twitter page, Hillary offered more details about the book.

Some new details out today about my first novel, an international thriller co-authored with the great Louise Penny.

The story starts when a young foreign service officer receives an anonymous message she realizes too late is a coded warning. https://t.co/wFFmAIb2qK pic.twitter.com/4vDeP8GCDA

Meanwhile, Bill is gearing up for the release of his second collaboration with Patterson, The President's Daughter, in June.

"I never imagined I’d be writing a book with a master storyteller like Jim, much less two,” Clinton said in a statement. “I was grateful for the success of the first book, and I believe readers will enjoy reading The President’s Daughter as much as I’m enjoying working on it.” James Patterson with former president Bill Clinton in 2018 following the release of their book, The President Is Missing. (Picture: Gallo Images/Getty Images)

“Working with President Clinton has been a highlight of my career, and I’m thrilled to have the chance to write with him again,” Patterson added.

A TV adaptation of The President Is Missing is already in the works, with Clinton and Patterson having reportedly sold the rights for more than $5 million.