What to watch | An irreverent superhero reboot, a frenetic action comedy and a thought-provoking sci-fi gem Guardians of the Galaxy director James Gunn was snatched up by Warner Bros to helm this DC Comics movie after Marvel (briefly) sacked him over a series of old but offensive tweets.

This follow-up to the similarly titled 2016 comic-book adaptation is partly a sequel, with several returning characters, as well as a soft reboot.

The first film was mangled in post-production, leaving it a nonsensical mess despite the best efforts of director David Ayer (End of Watch, Fury) and the cast, which included Margot Robbie and Will Smith. This time around, Gunn gets to be Gunn and – unhindered by the constrictions of a PG13 rating or studio interference – his Suicide Squad is one part Guardians and a lot more parts reminiscent of his bloody pre-Marvel horror movies such as Slither (2006).

The plot is paper thin: the Dirty Dozen-style squad of supervillains must infiltrate a Latin American country to find and destroy a mysterious superweapon. But that doesn’t matter, as the movie exists as a series of big action set pieces, punctuated by loads of silly, often gory, and dark comedic gags.

Harley Quinn (Robbie) fares much better here than she did as an overly sexualised cartoon in the previous film, and Elba and Cena are delightfully funny as bickering assassins Bloodsport and The Peacemaker.

It’s not one of the great comic book movies but it’s a blast – a little too long but tremendous fun. 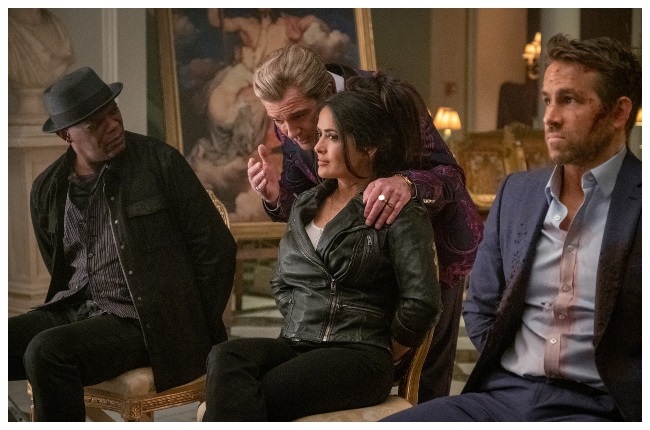 Action comedy. In this sequel to The Hitman’s Bodyguard (2017), suspended bodyguard Michael Bryce (Ryan Reynolds) is trying to enjoy a well-deserved holiday in the sun.

But Sonia Kincaid (Salma Hayek), wife of hitman Darius (Samuel L Jackson), shows up and begs him to  – once again – keep her husband from getting killed.

Darius has been kidnapped by gangsters and she needs Michael to help find and rescue him.

Against his better judgment, Michael agrees, but after saving Darius the trio are apprehended by Interpol agent Bobby O’Neill (Kingdom’s Frank Grillo) and given a deal instead of imprisonment: they must help find terrorist Aristotle Papadopoulos (Antonio Banderas), who’s planning a cyberattack on Europe. So the frenemies set off on a new mission, which sees Michael turning to a veteran bodyguard (Morgan Freeman) for help.

Director Patrick Hughes (The Expendables 3), who also directed the first film, and the A-list cast seem to have had a ball making this silly movie – there are even more explosions, gun fights and stunts than the first time around. If you enjoyed the frenetic first film and are a Reynolds fan, this flick is a good way to spend a Friday evening. But if not, the predictability of the gags and the characters’ over-the-top antics might just leave you wanting to take out your own hit! Sci-fi adventure. Warning: this movie isn’t for vegans. But for the rest it’s an exciting adventure about a genetically modified pig.

The viewer accompanies South Korean girl Mija (Ahn Seo-hyun) on a crazy, beautiful and horrific journey. Together with dodgy animal-rights group the Animal Liberation Front (ALF), she wants to save her beloved “super-pig” Okja from becoming salami sticks.

To her he’s a darling pet, but unbeknown to Mija her granddad (Byun Hee-bong) got Okja 10 years earlier from multinational conglomerate Mirando Corporation as part of a worldwide experiment to see who could raise the best specimen. Mirando now wants Okja in New York to promote the image of its CEO, Lucy Mirando (Tilda Swinton in all her over-the-top glory), and Mija sets off to rescue him.

The cast of this modern fairytale also includes Paul Dano (There Will Be Blood) and Lily Collins (Emily in Paris) as ALF members, plus Jake Gyllenhaal as a pig hunter.

This hidden gem is another treasure from South Korean director Bong Joon-Ho, so if you’ve overlooked it among his more high-profile work such as Oscar-winning Parasite (2019), move this to the top of your watchlist now. But keep in mind that although the main character is an adorable CGI creature, Okja is definitely not a kids’ movie.

We live in a world where facts and fiction get blurred
In times of uncertainty you need journalism you can trust. For only R75 per month, you have access to a world of in-depth analyses, investigative journalism, top opinions and a range of features. Journalism strengthens democracy. Invest in the future today.
Subscribe to News24
Next on You
Gemma Chan unleashes the supernatural in The Eternals