Gladys van Wyk from Rawsonville in the Western Cape was abused and raped as a young girl and today she is instilling hope in children enduring similar traumas. (Photo: Supplied)

Broken, but blessed. This is how Gladys van Wyk describes her life. The 58-year-old mom from Rawsonville in the Western Cape was abused and raped multiple times as a young girl.

When her pleas for help fell on deaf ears, she ended up running from home. Today she’s back in Rawsonville to feed and instil hope in children enduring similar traumas.

She shares her story of hope.

“I remember a day, I don’t exactly know how I old I was, when I told my mom what my stepfather did. Something wasn’t right because I saw blood running from my legs, but I didn’t understand what was happening.

My mom got upset and told me I was lying. She said I should go outside and play because my stepfather would never do that. But the abuse continued and after that my life was never the same.

When I was 13, I decided to go to my grandfather who lived nearby. I stayed there for a week because he was the only man I trusted. Then, one day, a bakkie came around looking for people to work. I jumped at the chance to get away and left for Cape Town.

That is how my life went. I’d run away, find a family to stay with where I would do odd jobs like working in a shop or cleaning their homes. But because I was still young my mom would find me, and I’d have to return home.

The cycle was broken when I got a job working at Palace Bioscope in District Six where I earned about R10 every month. Those were good days. At 18 I fell pregnant and went back to my mom because I was betrayed by the father of my son, who I never saw again. Things got even worse – my mom ended up throwing me out when my son was just two days old. 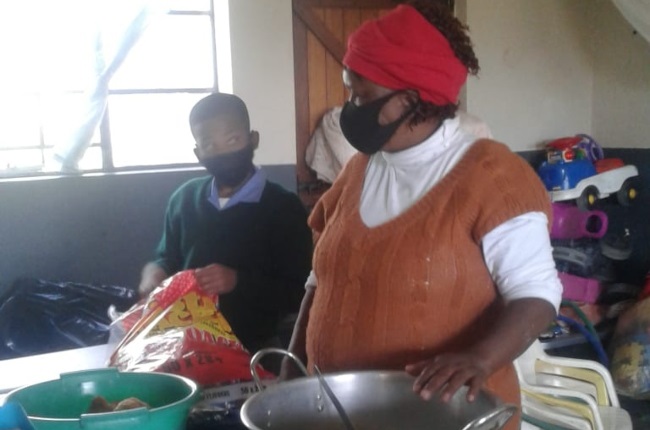 This is when my friend offered me a place to stay. That friend became my husband, but it was the biggest mistake of my life. I married him just to survive and we had a child together, but he also ended up abusing me. Those were hard years, being with someone you don’t really love.

I had two kids, but I eventually found the strength to leave him. A couple of years later, I met my second husband who was from a farm near Rawsonville. We moved to Woodstock in Cape Town when we found work with one of the families I knew. We stayed in Woodstock for a few years and my life finally started taking some shape.

My husband, who I’ve now been married to for 26 years, and I joined a church with our kids where a pastor told me I should use everything that has happened to me and help others. The church is also where I learnt all about soup kitchens.

READ MORE | Cape Town survivor's story of hope: my sexual assault will not define my future

I then decided to go back to Rawsonville, the place I constantly tried to run away from. At first, my husband and I would drive up on certain days to deliver food and share our story with others in the hopes of helping them. But after a while it became too expensive and we decided to move back permanently.

We’ve now been in Rawsonville for 15 years. I have four beautiful children and five foster children who give me more purpose every day. When we moved back, we started a soup kitchen called Living Valley Kids. Now we feed about 60 kids from three different farms outside Rawsonville every Tuesday, Wednesday and Thursday. Gladys says she has received helped from as far as Pretoria to keep her soup kitchen going. (Photo: Supplied)

We keep the soup kitchen alive through the support of many kind people I met in Cape Town. There’s also a woman from Pretoria who helps me with food and supplies every month. Aside from feeding the kids, I offer counselling sessions to survivors of rape and abuse. I do my best to encourage them and get them to trust me, but it’s difficult for them to open up because they’re so scared.

If there’s one thing I’ve learnt it’s that these experiences can absolutely break you. But there are people who want to help you and you must just be willing to accept it. To those who are struggling, it’s important to remember you have to keep moving. Ask forgiveness and forgive those who wronged you. The moment you forgive you are free and the healing can start – not just for you but for those around you.”

We live in a world where facts and fiction get blurred
In times of uncertainty you need journalism you can trust. For only R75 per month, you have access to a world of in-depth analyses, investigative journalism, top opinions and a range of features. Journalism strengthens democracy. Invest in the future today.
Subscribe to News24
Related Links
‘I was gang raped by 6 men and left for dead’ – A survivor’s story
Pretoria woman walks 729km to heal from brutal rape
MY STORY | I’ve been in a relationship for 5 years but I’m still not in love with him
Next on You
MY STORY | The horror of seeing my hometown destroyed as SA descends into chaos