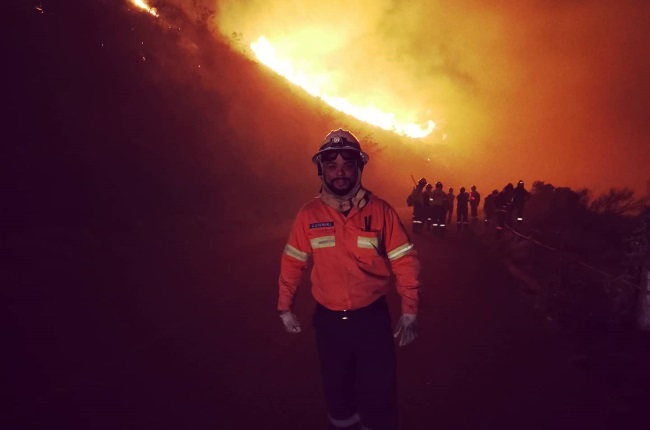 Firefighter Pierre Brophy was one of the fire officers on scene at the recent wildfire, that spread across the slopes of Table Mountain (PHOTO: SUPPLIED)

Cape Town firefighter Pierre Brophy was one of the men who battled the recent blaze that spread across the slopes of Table Mountain, destroying several buildings and reducing vast swathes of the mountain to a moonscape of ash.

Pierre (33) says helping others had long been his passion and becoming a firefighter is something he has always wanted to do.

After taking up an opportunity to train and work with lifeguards in Dubai, he returned to SA in 2009 and settled in Cape Town to pursue his childhood dream. He’s never looked back.

“There’s nothing I’d rather do, I’m right where I need to be,” he says with a smile.

This is his account of the terrible fire of 18 April.

“The 48 hours I spent on the scene of the fire were chaotic. The fire was moving at such a rapid pace - the wind was howling and firefighters on duty that day were really struggling.

Helicopters were dispatched and we were called out to what initially started as a mountain fire. It then became a structural fire, after embers literally flew over our heads and landed on the road and buildings at UCT.

Another big concern was alerting hikers and getting them safely off the mountain. As we know, hiking is basically a Sunday tradition for Capetonians.

It was a struggle to try to predict where it would go next – just as we thought we had one base covered, the wind would sweep up an ember and spark up somewhere else.

We also found ourselves rushing from one fire line to the next to stop the houses in the area from catching alight. By the early hours of Monday residents in the line of fire were alerted and evacuations had to take place almost immediately.

Incident commanders from SANParks oversaw and coordinated operations on the mountain and officials from the City of Cape Town covered the structural fire.

Did I mention it was chaotic? "Always an honour" Pierre says of working alongside other heroes. (PHOTO: SUPPLIED)

As the fire moved, so did we. We tried to get ahead of it each time, thinking we were fighting one flank, but it just kept developing. We also just couldn’t go in and spray everything with water – in some cases you let the fire burn out to a certain point before fighting it.

Visibility was also extremely poor. The smoke was thick in the air from the burning vegetation around us, so we almost couldn’t see where it might flare up next. We also had to keep an eye out above us for the trees as they were burning from the inside and collapsing around us.

Several firefighters were injured and some severely burnt.

I can tell you without a doubt that fear in those moments is real and it can sometimes overwhelm you.

As much as we’re out there doing a job, we also know our loved ones are constantly worrying whether we’re okay. I didn’t really have a chance to touch base with my wife, Erin, who knows how much I love what I do, during those 48 hours.

But the fear also sort of drives you: that’s when every bit of your training kicks in and reminds you to go in and be aware of your surroundings. Working alongside remarkable people who share the same burning passion as you is also such an honour.

There’s a feeling you get when you stand and gaze at the flames – as the adrenaline rushes through your body, you sort of go into ‘fight mode’ knowing the responsibility that comes with the job.

I’ve been hugely inspired by my dad.

He was a firefighter and growing up as a young boy in Pietermaritzburg, I had the opportunity to go to work with him and see him do what he loved. Honestly, since then I was sold. Since he was a toddler, Pierre's been inspired to follow in his father Gaston's footsteps. (PHOTO: SUPPLIED)

I knew this was exactly what I wanted to do. I always wanted to follow in my late father, Gaston's footsteps.

After qualifying as a professional firefighter in 2010 and working for a while at the airport, I volunteered and studied to be a wildfire specialist in Cape Town.

This meant that I’d join the firefighting teams that would attend scenes and help across the Western Cape. We assist SANParks, the Cape Winelands and Overberg and also helped with bigger blazes like the Knysna fire and Betty’s Bay fire a few years ago.

Fire season and serving as a firefighter in the Western Cape is so different to the rest of the country. The fynbos vegetation, sometimes rocky terrain and windy weather conditions, make the job harder out here but would I be anywhere else? No!

As much as it was a destructive event, the recent Cape Town fires reminded us of the spirit of Ubuntu in the country. People came together to donate and drop off goods for students and brought refreshments and meals and even eye drops for the firefighters.

The feeling that you have the support of an entire community and city behind you – it’s really humbling. The most rewarding thing about what we do is being able to help others and just make a difference.

While it may sometimes be challenging, I simply love what I do.” Pierre's wife Erin gives her hubby her full support. (PHOTO: SUPPLIED)
We live in a world where facts and fiction get blurred
In times of uncertainty you need journalism you can trust. For only R75 per month, you have access to a world of in-depth analyses, investigative journalism, top opinions and a range of features. Journalism strengthens democracy. Invest in the future today.
Subscribe to News24
Next on You
MY STORY | How I fell victim to a job scam in the Middle East