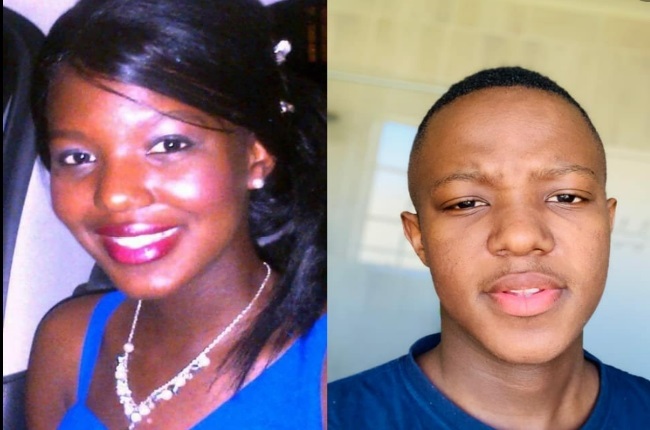 Noks Simelane before and after his transition. (PHOTO: Supplied)

Noks Simelane (24) shares his experience living as a transgender man in South Africa. His confidence is the most beautiful thing he possesses, he says.

Growing up in Pietermaritzburg in KwaZulu-Natal, in a religious home where nothing out of the ordinary was tolerated, Noks is now unashamedly himself.

"My granny did not understand because she's from an older generation and more religious, so whenever I'd wear guy's clothes – as a girl at that time – she'd ask me why I was wearing them and she would tell me that girls shouldn't do that. It was always stereotypical.

However, having a young mom helped me to freely express myself and be myself.

She was very understanding and willing to learn and educate herself. My mother wasn't hard on me and neither were my cousins, uncles and aunts, because they were young and understood the LGBTQI+ community.

They always said that even from a young age they could tell that I was different but, because of the lack of information back then, they couldn’t pinpoint what that difference was.

The reception I've had, and am still getting from my community, is not bad at all. There are still stares and curiosity, but I'm outspoken and I don't mind educating people. I discovered who I was at a very young age.

I first came out as lesbian, but it was at age of 14, in Grade 9, that I realised that there was more to it than that. I went to YouTube and the internet trying to find out what was happening to me.

Then I stumbled on the word 'transgender'.

A transgender person is one whose sense of personal identity and gender does not correspond with their birth sex. Five years later I embarked on my transitioning process.

It was a mixture of excitement and fear. After seeing so many men transition on YouTube, I was excited that it was finally my turn to come out as a different image, but at the same time I was scared of being rejected.

The first step in the process was a psychological and emotional evaluation. I attended therapy sessions to ensure that I was certain about my decision and wouldn't regret it later.

After my therapy session, I saw a GP who prescribed depo-testosterone for self-injection.

Depo-testosterone is a hormone used to treat disorders in men and boys which are caused by a lack of testosterone, such as delayed puberty, impotence and other hormonal abnormalities.

I take my shot every two weeks.

Surgery can be done when you're ready and I'm hoping to get my top surgery soon. That will be the removal of my breasts.

Unfortunately, in South Africa not every health facility can accommodate transgender people.

We often have shortages of testosterone shots and because I haven't removed my female reproductive system, I still get my period. Noks celebrates his life and is proud of who he is. (PHOTO: supplied)

I don't let hate and discrimination get to me because, while I believe everyone has a right to their opinion, it won't stop me from being an openly trans man.

I am aware of the curiosity people have around love, sex and relationships for trans men.

For the record, I've never been interested in men.

I prefer being with someone to whom I won't have to constantly explain myself. That could be a pansexual or bisexual woman.

I haven't had the best experiences in love, but I am not going to give up.

I mean, I do hope to get married and have my own biological children and, before you ask, no, I don't intend on carrying the child myself.

I'd prefer to go for in-vitro fertilisation (IVF) and have my partner carry our children, if she's keen.

I urge anyone who wants to embark on their journey to do what makes them happy – but please do it in an environment that's right for your mental health and safety.

I'm very happy with where I am right now and I'll continue to educate people about being transgender through my YouTube channel.

I hope that someday we'll have a world where the LGBTQI+ community can live freely without having to explain that we also live like heterosexuals."

We live in a world where facts and fiction get blurred
In times of uncertainty you need journalism you can trust. For 14 free days, you can have access to a world of in-depth analyses, investigative journalism, top opinions and a range of features. Journalism strengthens democracy. Invest in the future today. Thereafter you will be billed R75 per month. You can cancel anytime and if you cancel within 14 days you won't be billed.
Subscribe to News24
Next on You
MY STORY | For 17 years my son had a hole in his heart, then he had life-changing surgery