Phedre Issel of Worcester in the Western Cape was stunned when she was told she had cancer – the first member of her family to be diagnosed with the disease.

After four months of intense treatment, she is almost cancer-free and wants to share her story to bring hope and comfort to others.

“Just after my 21st birthday in September last year I started experiencing back pain and abdominal discomfort. I thought I had overindulged on birthday cake, so I ignored it for a while. But after I couldn’t ignore it anymore.

I went to my doctor, who sent me for an ultrasound. The scan showed lesions on my pancreas and adrenal gland and doctors suspected I had MEN syndrome, a genetic condition that causes overactivity in and enlargement of certain glands. It was quite traumatising – I thought my life would never be the same because it’s very hard to get treatment for this disorder. After her first session of chemo. (Photo: Supplied)

My pain persisted and, desperate, I went back to my doctor who referred me an endocrinologist. I was hospitalised for a week so they could run diagnostic tests. Then I was sent for a biopsy and on 30 November I got a phone call that turned my life upside down. I had been diagnosed with stage 4 diffuse large B-cell lymphoma, the most common form of non-Hodgkin’s lymphoma. It was a massive shock.

I’m the first member in my family to have cancer and we didn’t know anything about it. But my doctor explained the disease and the treatment so well it gave me hope I could survive this. 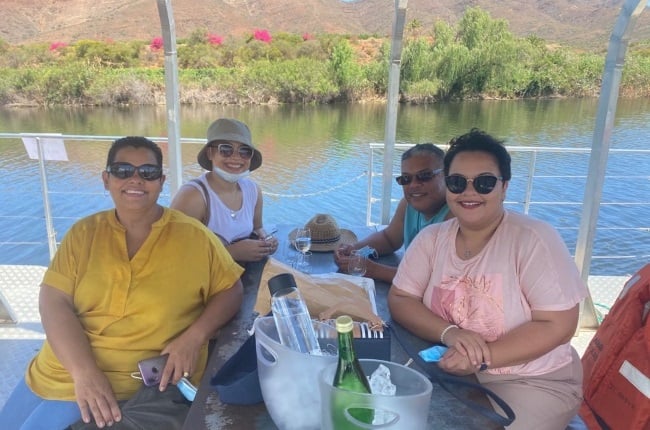 With her mom Deidre, dad Floyd and sister Ilke, who Phedre says has been her biggest support. (Photo: Supplied)

I started chemotherapy and after my third session it really hit me that I was sick. Chemo is tough. You lose a piece of yourself after every session and you’re so exhausted even talking is tiring.

During those dark moments, my faith, family and friends kept me going. It also helped that I’ve always been someone who looks for the silver lining in everything, so I tried to look for something good in each day. She says she decided to cut all her hair off after her first chemo session. (Photo: Supplied)

After her fourth chemo session, more than 80% of my cancer was gone. It’s amazing to hear. I hope to see a clear CAT scan next time so I can complete my studies.

I’m a fourth-year teaching student at Two Oceans Graduate Institute in Observatory, Cape Town, but had to put my studies on hold to focus on getting better.

In the meantime, I’ve started a Facebook page, Raising Awareness for Non-Hodgkins, where I share my journey. When I started chemo, I went looking for support groups and couldn’t really find any in South Africa, especially for non-Hodgkin's lymphoma. This page gives me the opportunity to be a beacon of hope for someone who is newly diagnosed. It also allows people with cancer to connect and share their experiences. Phedre is a fourth-year teaching student at Two Oceans Graduate Institute but had to put her studies on hold. (Photo: Supplied)

My diagnosis made me realise sometimes you must push your plans aside and let life just do its thing. Despite the challenges, I’m grateful to have the strength to fight and not fear the what-ifs. I appreciate every day as it comes.”

This is an aggressive cancer that affects the lymphatic system.

DLBCL targets the body’s B-cells, an important part of the lymphatic system that make antibodies to fight infection.

DLBCL is the most common type of non-Hodgkin’s lymphoma. According to the Lymphoma Research Foundation, more than 18 000 people are diagnosed with DLBCL each year.

Treatment
This is determined by how advanced it is, but typically includes:
• Radiation therapy
• Chemotherapy
• Immunotherapy
• R-CHOP treatment, a combination of chemotherapy and immunotherapy medication.

We live in a world where facts and fiction get blurred
In times of uncertainty you need journalism you can trust. For 14 free days, you can have access to a world of in-depth analyses, investigative journalism, top opinions and a range of features. Journalism strengthens democracy. Invest in the future today. Thereafter you will be billed R75 per month. You can cancel anytime and if you cancel within 14 days you won't be billed.
Subscribe to News24
Related Links
I ignored doctors' advice for 16 years and lost half my face to skin cancer
This young South African beat leukaemia as a baby and is determined to beat the new cancer now...
Young PE woman battles the odds in her 7-year fight against cancer
Next on You
MY STORY | 'I’m thrilled to be a complete woman after my sex reassignment surgery,' says Miss SA competitor