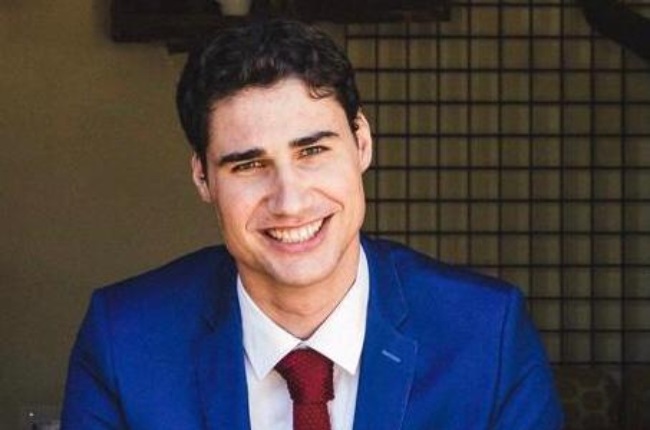 Juan Louis Van Der Vyver before the accident. He says before his life changed in 2017, all his plans seemed like they were falling into place. (Photo: Supplied)

When he broke his neck in a swimming accident, doctors said there was little hope he’d walk again. But Juan Louis Van der Vyver from Cape Town decided otherwise. Just three-and-a half years later, the 27-year-old is now walking without crutches and wants to share his story to inspire others.

Before the accident everything seemed like it was falling into place. I always thought if I studied and worked hard and knew the right people, I could make lots of money and life would be good. I was also very active and did all sorts of activities like trail runs, swimming, rugby and canoeing.

After matriculating from Worcester Gymnasium in 2012, I studied BCom law and BCom chartered accounting at North-West University – but just two weeks before taking my final exams, my life changed forever.

It was 14 October 2017 and I was swimming at the home of family friends. I can’t remember exactly what happened: all I know is I dove into the water, hit my head and woke up in ICU two days later.

I was told when I got to hospital I stopped breathing and doctors said they needed to operate immediately to save my life. I had injured my third, fourth and fifth vertebrae. He says he spent about 10 days in ICU before he was transferred to a rehabilitation centre. (Photo: Supplied)

Doctors told me I was paralysed from my neck down and there was little hope I’d walk again. I was devastated but after the first week I realised I couldn’t turn back time – all I could do was give my recovery my best shot.

I was in ICU for 10 days before being transferred to a rehabilitation centre, where I stayed for five months. What was very encouraging then was hearing how everyone was praying for me, people from all over the world.

In rehab I was basically taught how to do everything all over again, like rolling over, walking and eating, which was very difficult. I was paralysed from my shoulders down, so it was hard to lift my arm and here I was being encouraged to use my hands to eat again. Gradually, however, I started getting stronger and getting some mobility back. Juan Louis says he started walking with a walking frame in December 2017 after being in a wheelchair for two months. (Photo: Supplied)

I was in a wheelchair for two months and in December 2017 I started walking with a walking frame, just to get used to it. A month later, I was getting around on crutches. Staff at the rehab asked if they could order me a wheelchair for when I went home and I said, “No, I believe I will walk again”.

It was hard work but on 15 March 2018, I walked out of the hospital on crutches. Last year I started using a walking stick and I now no longer need crutches.

After the accident I asked God why it happened, what the plan was and what I could learn from this.

Then I realised that before the accident I was impatient, and suddenly everything was slowed down, which was a huge knock. So I definitely learnt to have patience. But I also realised the only thing I have control over is giving it my best in recovery and taking all the time I need to train. So I worked hard from there.

The most challenging part was the thought of not being able to do stuff on my own and the most difficult time was when I didn’t really see much improvement in 2019. It was tough because I thought that was it.

But the support from my family and friends has played a big role in my recovery. I was lucky because my whole family still supports me and without them I wouldn’t be able to stay positive. Before the accident he was very active and did all sorts of activities like trail runs, swimming, rugby and canoeing. (Photo: Supplied)

Part of my journey is finishing my articles to qualify as a chartered accountant. Last year, I started working for PwC where I’m doing my auditing articles.

My story has made me realise miracles still exist. Everything in my life was planned out and I realised that yes you can have a plan, but it will not always play out the way you thought it would.

I think that’s the message I want to send, especially because I’m Christian. God always has plans, and His plans never run out and I think He just wants to give you a push on the road. Juan Louis on a tandem bike with his dad, Lomon Van der Vyver. He says these days he enjoys riding on a tandem whenever he gets the chance. (Photo: Supplied)

I don’t really want to focus on how hard I had to work in rehab and how far I’ve come – let’s just say it adds perspective to the big miracle this is.

So often we tend to look for the big breakthroughs in life and disregard the small steps you have to take to get to that breakthrough.

We live in a world where facts and fiction get blurred
In times of uncertainty you need journalism you can trust. For only R75 per month, you have access to a world of in-depth analyses, investigative journalism, top opinions and a range of features. Journalism strengthens democracy. Invest in the future today.
Subscribe to News24
Next on You
MY STORY | I fought the recent Cape Town fires and it was a terrifying but truly humbling experience