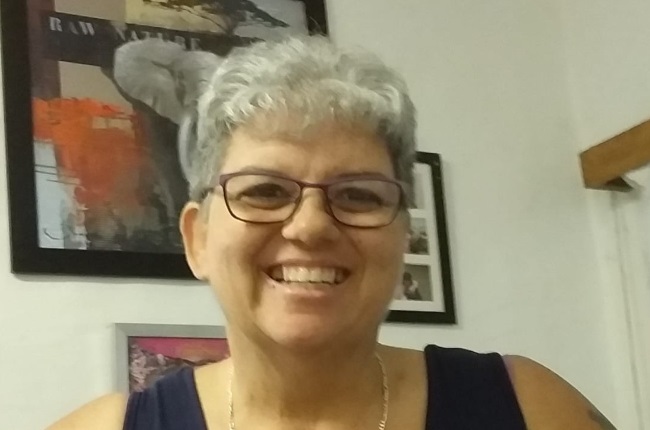 Claudette Power landed in ICU for three months after going in for an operation to remove ovarian cysts. (PHOTO: SUPPLIED)

What was supposed to be a routine operation turned into a life-or-death struggle for an East London grandmother.

After complications arose following an op to remove ovarian cysts, Claudette Power slipped into a coma.

When she eventually regained consciousness three months later, the 52-year-old had to learn how to walk and use her arms and hands.

Now, a year on from her coma ordeal, she is sharing her story in the hope that it will inspire others.

“My journey started on 16 January 2020 when I went in for a routine operation to remove two ovarian cysts. The cysts were so large that they were pushing against my colon, forming a kink.

But after the op, complications arose. After developing septicaemia, I fell into a coma and was in ICU for three months.

During this time, my life hung in the balance. I developed organ failure, had numerous strokes, was put on dialysis – which did not work at first – and contracted pneumonia. She spent three months in ICU, comatose and breathing through a tracheostomy. (PHOTO: SUPPLIED)

The nursing staff did not have much hope of me surviving. I had a huge wound in my stomach and had a vacuum attached to it for four months, which cleaned the wound.

While in the coma, I could hear everything going on around me. I could hear the doctors and nurses, and members of my family saying they loved me and urging me to fight.

I remember my daughter played a video of my grandson saying, “I love you, Ouma.”

The worst part was that even though I could hear him and everyone else, I could not talk no matter how much I wanted to. After three months of being in a coma, Claudette finally pulled through. (PHOTO: SUPPLIED)

After three months, I came out of the coma but was unable to walk, or use my arms and hands because of the numerous strokes I’d suffered.

I was sent to rehab in East London, where I stayed for a month learning to walk and use my limbs again. I also had to go for speech therapy.

During my stay in rehab, I could not even turn myself in bed so the nurses had to help me. And then, as if things weren’t bad enough, Covid-19 happened.

I wasn’t allowed visitors and could only communicate with loved ones via phone calls. I knew I had to fight and get through this – not just for myself but for my family and friends, and I had to tell my story. Claudette leaves rehab with the assistance of a walker. (PHOTO: SUPPLIED)

I left rehab using a walker and 34kg lighter. Now I can walk on my own and I’m getting stronger every day. I'm able to cook, clean and feel truly blessed to be alive.

But I couldn’t have done it without my husband, Tony; daughter, Teneil; and the rest of my family and friends. Without everyone sending messages and prayers, I would not be here today to tell my story.

She and her husband got matching tattoos three years ago which has become their mantra. (PHOTO: SUPPLIED)

Three years ago my husband and I got identical tattoos on our left arms, which read: “Faith Hope Love”, and this sums up everything.

I'm proof that miracles do happen.”

We live in a world where facts and fiction get blurred
In times of uncertainty you need journalism you can trust. For 14 free days, you can have access to a world of in-depth analyses, investigative journalism, top opinions and a range of features. Journalism strengthens democracy. Invest in the future today. Thereafter you will be billed R75 per month. You can cancel anytime and if you cancel within 14 days you won't be billed.
Subscribe to News24
Related Links
MY STORY| I survived leukaemia three times – now I want to help others with cancer
MY STORY | How faith and perseverance gave my clinically dead son (4) new life
My story: My son had 40 to 50 spasm a day – here’s why
Next on You
MY STORY | 'I’m thrilled to be a complete woman after my sex reassignment surgery,' says Miss SA competitor