Covid-19 reunites sisters after being separated for 50 years: ‘I never thought I’d find her’ 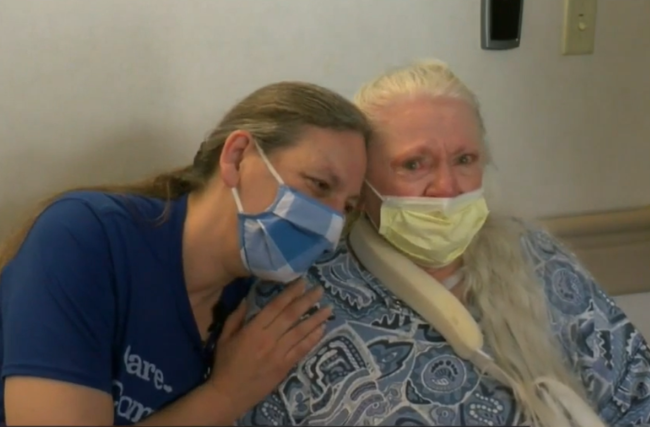 After spending 50 years apart these sisters have been reunited thanks to the coronavirus.

The Covid-19 pandemic has negatively impacted many people around the world but for Doris Crippen (73) and Bev Boro (53) from Nebraska in the US, this time will forever be memorable.

The two were reunited on 27 June at a nursing home where Bev works as a medication aide, which also happened to be where Doris was admitted when she suffered a fall and consequently also tested positive for Covid-19, Washington Post reports.

You might like| Owner is reunited with missing dog after ‘six cold days’ – and it’s the best thing you’ll see today!

Doris and Bev, who share the same father, were separated after Bev was given up for adoption as a baby and placed into the foster care system when she was six months old. At the time Doris, who was raised by her biological mother and stepfather, was only 20 years old.

Doris was admitted to the hospital after she broke her arm while reaching for a glass of water from her bedside in her apartment. She also spent more than a month recovering from Covid-19, according to PEOPLE.

Thereafter, she was transferred to a rehabilitation centre and nursing home where Bev works. The 53-year-old then came across a name that resembled that of her sister she was separated from nearly five decades ago, Fremont Tribune reported.

“I saw her name on the board here and I just couldn’t believe it. I was just like, ‘Oh my god. I think this is my sister,’” Bev recalled telling a nurse.

Bev then wrote their late father’s name on a whiteboard and pointed to it while re-enacting rocking a baby to try to point out to Doris, who’s hard of hearing, that that’s her father’s name.

“‘That’s mine, too,’” Doris recalled of the moment they discovered they were sisters. “I nearly fell out of my chair – I just burst into tears. I never thought I’d find her. I couldn’t sleep that night, I was just so happy.”

After years of searching for each other the sisters were finally reunited, albeit due to unforeseen circumstances.

“I’m the happiest person in the world,” Crippen said. “I can’t believe I finally found my sister.”

The sisters’ father wed three times and in total had 10 children, with Doris being the eldest and Bev the youngest.

Throughout the years Bev kept virtual contact with her other siblings and introduced Doris to them via a video call.

Related Links
Twins separated 23 years ago both became photographers
Brother and sister abandoned at birth 50 years ago are reunited
Owner is reunited with missing dog after ‘six cold days’ – and it’s the best thing you’ll see today!
Share
Next on You
This young girl can finally smile again after she was born without a top lip