Free State woman and her terrified Labrador reunited after crash 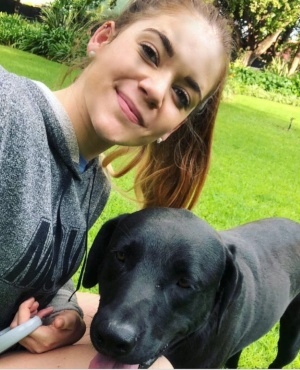 She remembers feeling helpless when the bakkie swerved off the road and flipped: One moment she was swerving to avoid a buck, the next she was praying she’d get out of the vehicle alive.

With red dust from the crash still hanging in the air, Suné Roux (23) had just one concern: Her fear-stricken dog had fled the scene.

Having escaped a potentially fatal crash with just a dislocated shoulder, the possibility of losing her beloved one-year-old Labrador, Benedict, was painful to Suné.

But there was nothing she could do – a passerby had summoned emergency services and she was taken by ambulance to a Bloemfontein hospital, leaving the fate of her dog in the hands of kindly bystanders.

On Monday April 8, Suné’s family put an appeal on Facebook – and the community of Bultfontein, western Free State, immediately joined hands to help track down the missing dog.

"My sister has been involved in an accident about 10km outside Bultfontein," the Facebook post read. “She had a Labrador in the bakkie with her – and he’s still missing. "It was a miracle. It could’ve been so different," said Carla Roux, Suné’s sister.

"The impact of the accident was so severe the bakkie is a write-off. We’re grateful that God protected [Suné] and after this we’re also hoping to get good news on Benedict."

And they did. By Monday afternoon scores of local people and farmers had started looking for Benedict, and the search went on until 02:00.

On Tuesday morning the family got a call from Wian Venter, a farmer: Benedict had been found at the accident scene and he was safe.
Suné Roux's sister Carla and Benedict. According to Carla, the dog was jumpy and afraid of the strangers but they managed to take him to a nearby farm.

Later in the morning Suné and Benedict were reunited.

"We’re so delighted. We don’t know how to thank everyone," Carla said. "It was wonderful to see how the community pulled together and complete strangers offered to help with the search."

"One doesn’t realise how quickly something can happen. Today Suné and Benedict have been spared and we’re enormously grateful for that."

We live in a world where facts and fiction get blurred
In times of uncertainty you need journalism you can trust. For only R75 per month, you have access to a world of in-depth analyses, investigative journalism, top opinions and a range of features. Journalism strengthens democracy. Invest in the future today.
Subscribe to News24
Related Links
Alexandra born equestrians on his dream for horse riding – ‘I want to see more jockeys of colour’
Rhodes students' tech waste management system puts them in line for R14m international prize
Policewoman bags shooting medals 5 years after losing nerves in hands in brutal attack
Next on You
Worcester mom takes legal action against the adult woman who had sex with her 13-year-old son