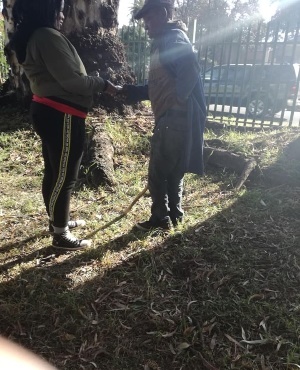 A Johannesburg woman took to Facebook yesterday to celebrate a homeless man who’s saved her life.

Zanele Masule, a personal assistant, was returning home from running a few errands on Wednesday evening when men armed with guns started running towards her.

“I was walking home through the park from the shops when a car stopped and three guys came running towards me,” she wrote on her Facebook page.

Frozen with fear, the 29-year-old was ready to hand over her valuables but before the men could get near her, an elderly homeless man chased them off with his walking stick.

Still in shock, Zanele couldn’t believe what had just happened and burst into tears thanking the homeless man, who’s identified as Oupa.

“I could only thank him with the little that I had which was R50 and some coins,” she said.

When the 29-year-old and her husband returned to the park in Melvern East, Oupa told her that the next time she felt scared walking through the park, she should shout out for him.

Zanele is inspired to do something special for Oupa to express her gratitude.

“I would love to get Oupa a Wendy house so that he at least has a roof over his head. He’s old and in bad shape and has no immediate family left. He also has a terrible limp,” she told YOU.

She’s urged people to donate building material to help build a shelter for Oupa during this winter season and she is starting a fundraising campaign for him.

“If people would be willing to donate old clothes, shoes and warm blankets that would be much appreciated,” she added.

“If anyone near or far would like to help him during this cold winter, please contact me as he’s a pillar of strength. We need more heroes like this.”

We live in a world where facts and fiction get blurred
In times of uncertainty you need journalism you can trust. For 14 free days, you can have access to a world of in-depth analyses, investigative journalism, top opinions and a range of features. Journalism strengthens democracy. Invest in the future today. Thereafter you will be billed R75 per month. You can cancel anytime and if you cancel within 14 days you won't be billed.
Subscribe to News24
Related Links
Petrol attendant hero responds to social media backlash on Shell donation
Boy saves life, receives hero award
'Hero paramedic' rescues elderly woman from building fire in Durban
Next on You
North West mother opens up about the terrifying night her husband was murdered next to the N4 highway