‘I’m pregnant with my grandchild’ 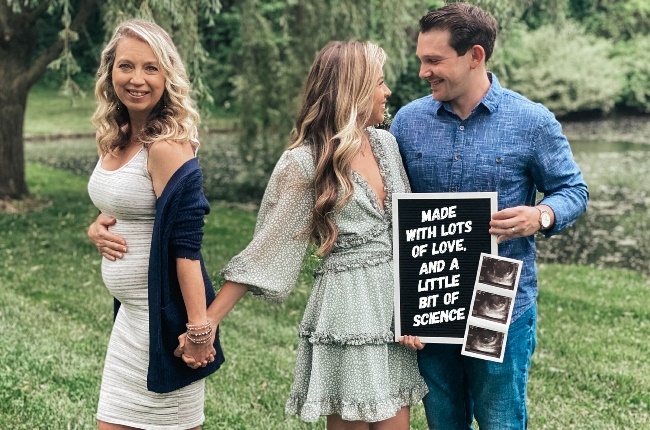 A selfless gran-to-be is pregnant with her infertile daughter's baby after offering to be her surrogate.

Breanna Lockwood (29), from Chicago in the US, was thrilled when she found out her mother, Julie Loving (51), was pregnant with her child after four heart-wrenching years of trying for a baby with her husband, Aaron (28).

The couple began trying for a baby after their wedding in July 2016 but were referred to a fertility clinic a year later after being unsuccessful in their attempts.

After spending $50 000 (about R850 000) on IVF, Breanna successfully fell pregnant twice but sadly lost both babies, including a set of twins.

This led to her developing Asherman syndrome, a rare condition causing scar tissue to develop inside the uterus, meaning she was unable to carry another child.

Julie, who works at a local supermarket, offered to carry her daughter's baby – using Breanna and Aaron's embryo – despite the chances being extremely remote due to her age.

But in March 2020, Breanna, who works as a dental hygienist, and Aaron, a computer specialist, were delighted to find out that Julie was successfully pregnant with her own grandchild after beginning the treatment in August 2019.

"My mom was begging me for the opportunity to carry her grandchild and I thought she was crazy. I didn’t even know it was possible until I brought it up to my doctor,” Breanna said.

“Our doctor decided to let her do a series of medical exams to see if she passed those before he made the decision and she passed all of them with flying colours.

“We started testing in August 2019 and we found out she was pregnant in March 2020. I was very surprised because we’d struggled for so long and it happened easily for her.

“We are very excited, we’re finding out the gender soon and we can’t wait to decorate the nursery, buy the little outfits.” The fertility clinic had high hopes for Breanna and Aaron as they couldn't find any reason as to why they couldn't get pregnant naturally.

After Breanna lost her twins conceived through IVF, she developed scar tissue inside her uterus which meant a baby wouldn't be able to grow.

“We were heartbroken, we’d been trying for a child for two years and we thought we had finally got past the hardship and were on our way to having our miracle baby and then we found out we lost the twins.”

Julie led a fit and healthy lifestyle regularly competed in marathons and triathlons and knew she'd be the best candidate for her daughter.

“She came to me when we were first trying for a baby using IVF and I didn't take her seriously until 2019,” Breanna says.

“My husband was on board, he was nervous because everyone wants to make sure it’s a healthy pregnancy but he trusts our fertility doctor so he was excited and amazed and thankful that she would do this for us.”

The age limit for some gestational carriers in the US is 35 years old but despite her much higher age Julie passed all the tests.

“Julie had an extensive workup and was considered uniquely healthy, which included completing marathons in her 40s,” he said.

“We are all thrilled. The family dynamic, unconditional support and sacrifice, and the resilience of the human spirit was humbling for me as a physician.”

Now, Breanna and Aaron are looking forward to welcoming their child in November and will find out the gender in the next few weeks.

“The pregnancy is going extremely well, Julie has had very mild symptoms and is feeling great,” the doting mom-to-be said.

“She lives near us, we’re able to fully help her and go to all her appointments and help her with whatever she needs. “Typically, I’m very private about my fertility struggles so I was nervous to announce it because it’s such a sensitive topic so it can be difficult. I was excited and nervous.