Impact of Covid-19 on local business: ‘It’s heartbreaking, everyone is struggling’ It’s the time of year their business teems with customers. The field, 23 000 square metres in size, is a hub of sporting activities. The restaurant, abuzz with patrons while kids busy themselves in the nearby play area.

Greg and Morag Maynard usually have their hands full catering to the countless feet that tread Zoo Lake Sports Club during peak season, which is the months of March and April.

But 2020 has been a very different year.

Due to the Covid-19 pandemic and subsequent lockdown the sports club, like so many other businesses, has had to close its doors.

Managers Greg and Morag estimate their loss of income at more than half a million rand since the start of lockdown.

As a result the club, situated in Parkview in Johannesburg, has had to rely on the UIF-Covid19 Ters (temporary employer/employee relief scheme fund) to pay its five full-time staff members.

But an apparent glitch in the system resulted in a lengthy delay and for more than two months staff went without pay.

“Some of these guys have been working for years, they’re in their 50s. Every month they religiously paid their Pay As You Earn [tax] and Unemployment Insurance Fund and now when they really, really need it, they’ve got nothing.” 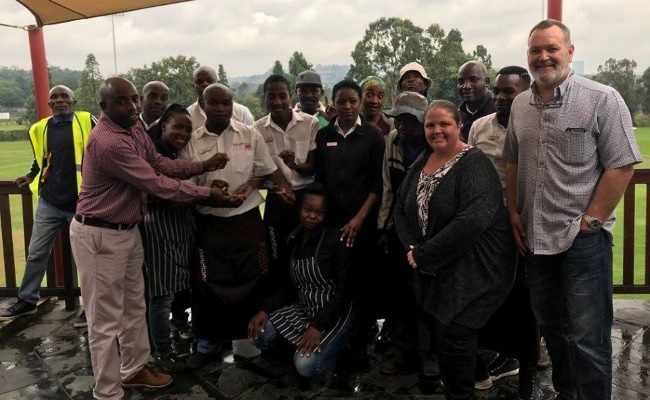 After weeks of fighting with government officials, Zoo Lake was finally paid its Ters money but this has brought little comfort.

In a time of economic uncertainty Greg and Morag fear they might have to close down their business for good.

“People have been phoning me saying, ‘Oh you must be so happy restaurants are opening again.

“But the reality is that no one wants to go out with their families anymore. You don’t feel safe and secure in a restaurant.

Now that government has closed the Ters fund, Greg and Morag are especially concerned.

Not enough support is offered to sport and recreation facilities and people’s livelihoods are on the line, they say.

"Some days I’m positive and other days I just want to climb under my bed."
Morag Maynard

“My optimism wavers,” Morag says. “Some days I’m positive and other days I just want to climb under my bed.”

When the national lockdown was initially announced, Greg and Morag were worried about their business’ chance of survival.

By then, services in the sports and recreation industry were already feeling the effects of the coronavirus.

“As soon as the coronavirus started hitting the country at the beginning of March, as a small business our income declined horrifically,” Margo explains.

“Leagues were pulling out and most sport was cancelled by early March already.”

By the middle of March, Greg and Morag realised they’d soon have a cashflow problem.

“The last month we had a semi-normal turnover was February. Not many companies in this economy have money set aside for unprecedented pandemics.” By the end of March the company had earned no income. They applied for the Ters fund as soon as it opened.

The fund was created to ease the impact of the pandemic on businesses and their employees and would pay out R3 500 – R6 700 for three months until the end of June.

On 22 April Zoo Lake received its first payment. But when they applied for the second month, there was a three-week delay in payment.

Morag says each time she called the helpline, she was told there was a glitch in the system and that the money would be paid out the following week.

“The people staffing this portal are probably just hired to answer the phone and don’t even know what’s going on,” Morag says, adding that she called every single day for two weeks.

“When you scroll through the informal UIF/Ters Facebook page, you’ll see people are so frustrated because there are no answers.”

It broke her heart having to relay bad news to her employees each time.

“There was one day I just completely lost it and I put the phone down and I just cried. Not being able to help my staff or give them conclusive answers . . . It hurt.

“You’re just told to wait. You have staff phoning you saying, ‘My baby is starving. What must I do?’ I can’t keep telling them to wait. Because then they don’t believe me.”

The lack of answers led to tension between the Maynards and their employees with some even accusing them of stealing the money.

“One staff member was saying that his mother receives her pension money on time every month. So to him it was inconceivable that the money could be a government issue.”

“It’s devastating giving such bad news to employees. We’re like a little family. And when you can’t pay your staff, even though it’s not your fault, you somehow feel responsible. It’s only an inhumane employer who won’t feel anything.”
Morag Maynard

“It’s devastating giving such bad news to employees. We’re like a little family. And when you can’t pay your staff, even though it’s not your fault, you somehow feel responsible. It’s only an inhumane employer who won’t feel anything.”

Finally on 26 June the money was paid and staff could receive a salary.

Greg (47) and Morag (46) have taken a financial knock too. They’ve had to make big cuts in their budget to make ends meet and with the business not opening any time soon, things aren’t looking promising.

“We’ve cut back on everything,” Morag says. “We just have the bare essentials. As everyone else has suffered, so have we.”

What has kept them going is their faith and the kindness of friends and family.

“We’re a Christian family; we live by faith. We’ve been blessed with our family and friends but it’s tough. Mentally and financially.”

The couple are currently fighting their insurers to have their business interruption claim pay out. They say even though there’s a notifiable disease that’s caused them to suffer loss of income, the company refuses to pay.

As much as the couple would love to throw open their doors again, Zoo Lake won’t be opening in the foreseeable future, despite eased lockdown restrictions permitting restaurants to open.

“At this stage we decided not to open. Our overheads would be far greater than our income. We tried the takeaway thing and we’re haemorrhaging money. We first want to see what other restaurants are doing.”

Does she think the business will ever recover?

“Like so many businesses in the recreation industry we’re wondering how we’re going to survive this.”

Morag wants the government to shift its focus to providing financial assistance and relief to the existing workforce.

“I don’t want to make it political because it’s about people not politics. But there’s more of an emphasis on providing social grants.

“Let’s be honest, people who haven’t worked and have only relied on social grants don’t have the same financial responsibilities as someone who works and pays taxes. More emphasis should be placed on people who pay the government’s salaries.” Approached for comment about Ters fund payout delays, the fund’s marketing and communication director, Makhosonke Buthelezi, said it was the result of their system being upgraded.

After receiving several complaints about employers allegedly withholding money after the UIF paid the money directly into their account, a new system was adopted, he said.

The upgraded system includes the option of paying employees directly.

“This option now requires us to check and verify the individual bank account details of hundreds of workers, in some cases thousands, before we disburse the funds to avoid possible fraud or paying the wrong person,” Buthelezi explained.

“The employer in question chose the option of UIF paying their workers directly. We apologise for any inconvenience caused but we must verify the bank details to pay the right person.”