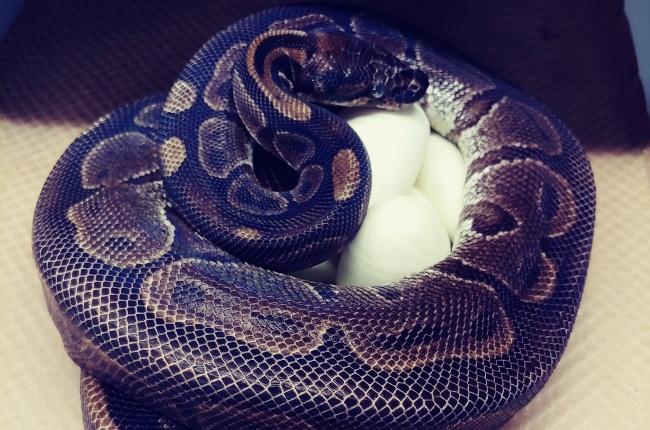 Zookeepers at Saint Louis Zoo in the US have been left baffled after discovering that their oldest snake laid eggs despite not being near a male snake for more than 15 years.

The 62-year-old ball python laid seven eggs on 23 July and Mark Wanner, manager of the herpetology at the zoo, says it was a complete surprise.

“We didn't expect her to drop another clutch of eggs,” he told CNN.

He says although it is unusual for ball pythons to reproduce asexually it is not rare. The snakes also sometimes store sperm for delayed fertilisation.

According to Dr Stephen Smith who is based at Tygerberg Animal Hospital in Cape Town, ball pythons usually stop laying eggs at around the age of 30.

“Usually female snakes lay eggs after mating with a male, but in rare circumstances they can produce young without mating in a process called parthenogenesis. There are several reported cases involving ball pythons,” he says.

Dr Smith says parthenogenesis is a process whereby females of some species can produce young without mating with a male. “Several lizard species do this as their only method of reproduction – the populations only consist of females,” he says.

“In certain other species, which normally use mating between male and female as their methods of reproduction, a form of parthenogenesis called facultative parthenogenesis can occur. This is when, under certain conditions, a female can produce young without a male – essentially a clone or half-clone of herself, usually when no males are present,” Dr Smith explains.

On 7/23, something incredible happened at the Herpetarium — a ball python laid eggs! This particular female snake is over 50 years old (the oldest snake documented in a Zoo) & has not been with a male in over 15 years!

The female snake in Saint Louis, known only as No 361003, is one of two ball pythons at the zoo’s herpetarium, and Mark says she is the oldest snake documented in a zoo.

Three of the seven eggs remain in an incubator, two were used for genetic sampling and the snakes in the other two eggs did not survive, the St. Louis Post-Dispatch reported. The surviving eggs should hatch in about a month.

Dr Smith, who is unaware of any reported cases in South Africa, says female snakes can store sperm from a single mating to fertilise several clutches of eggs laid at a later date.

“The clutches can even be fertilised by the stored sperm a year or two after the mating occurred.”

Ball pythons are small pythons native to West Africa which can grow up to 1,8m, although most are smaller than this. According to Dr Smith, they are called ball pythons because when they are threatened, they roll up in a ball to protect their heads.

“There are many different captive-bred colour varieties, some of which can be very expensive to buy.”

We live in a world where facts and fiction get blurred
In times of uncertainty you need journalism you can trust. For only R75 per month, you have access to a world of in-depth analyses, investigative journalism, top opinions and a range of features. Journalism strengthens democracy. Invest in the future today.
Subscribe to News24
Related Links
Social distancing in the animal kingdom
Dog waits three days outside hospital for owner with coronavirus
Meet the blue whale – an animal the size of a Boeing!
Next on You
It ain't over: a defiant and determined Donald Trump plots his comeback