A garden full of gnomes – collector has more than 200 statues 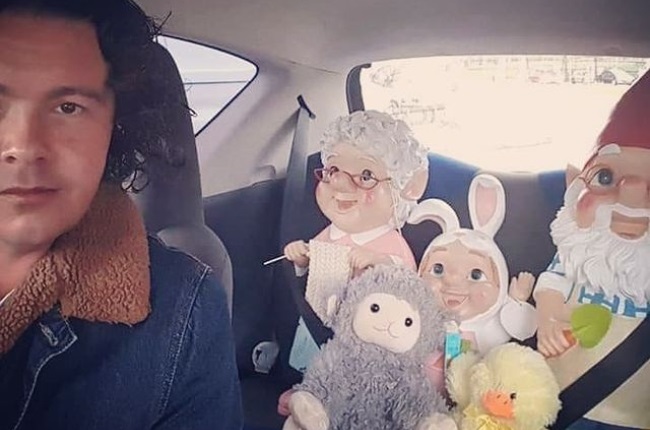 If garden gnomes creep you out, best you avoid the home of Dave Robinson, one of the most avid collectors of the little statues in the world.

Dave, who lives in Cornwall in the UK, has amassed 240 gnomes which now grace the garden of his property – much to his partner’s disdain.

“Yeah, my partner isn’t a fan,” admits Dave, who’s been collecting gnomes for the past five years. “I mean, it’s an acquired taste.”

As his collection steadily grows, the gnome superfan jokes he might need a bigger house soon – and perhaps a new partner who can put up with his pastime. Dave has 119 large gnomes in his collection and 120 small ones. (Photo: Instagram/ @d_averobinson)

Dave’s impressive collection, which boasts figurines in all shapes and sizes, is a nightmare to maintain, he says. “I used to spray them all with this lacquer and it’d protect them. But because Cornwall is quite sunny at times, I started repainting them. It can take me around five hours to paint one.”

His interest in the garden statues started in 2012 when Queen Elizabeth celebrated her Diamond Jubilee. Dave’s father spotted a gnome queen in a local supermarket that took his fancy. “I saw it and thought it was cute,” Dave says. At first, he was hesitant to buy it because their garden was overgrown. “But after a couple of days I thought, ‘Do you know, a gnome will look nice. Maybe two or three’.” His interest in the statues started in 2012. (Photo: Instagram/ @d_averobinson)

When Dave returned to the store, the gnome was sold out. “I ended up driving halfway around Cornwall. I found the queen gnome, a knight, a mother gnome and some children.” He later added a dog, cat, grandmother and grandfather “and it just sort of built from there”. Dave still drives up to five hours just to add a particular gnome to his collection.

His partner isn’t the only one who’s not a fan of his collection. Viewers cringed when Dave recently appeared on news programme This Morning to show off his gaggle of gnomes. “Cheers for the nightmares,” someone said on social media. Still, Dave isn’t letting the haters get him down – to him, gnome is where the heart is.

We live in a world where facts and fiction get blurred
In times of uncertainty you need journalism you can trust. For only R75 per month, you have access to a world of in-depth analyses, investigative journalism, top opinions and a range of features. Journalism strengthens democracy. Invest in the future today.
Subscribe to News24
Related Links
Wheel of fortune: Northern Cape farmer’s incredible R8-million collection of vintage cars
See this Cape Town man's incredible collection of 1 500 Barbie dolls worth R1,5 million
DIY mom uses cheating ex-husband’s record collection as new flooring
Next on You
This is why Bill Gates chose 97-year-old Charlie Munger as his divorce lawyer