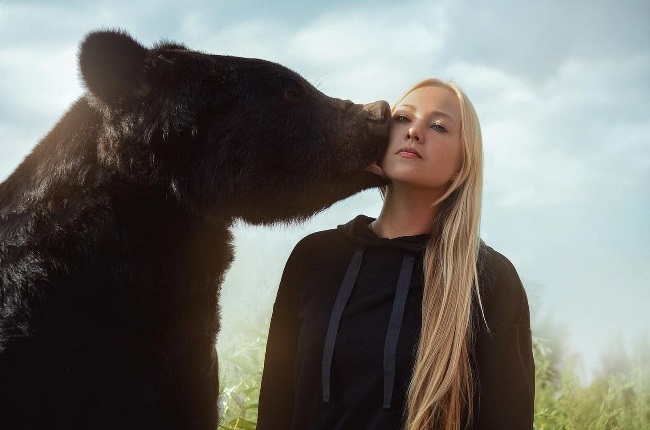 Motorists often do a double-take when they see the giant bear sitting in the passenger seat, riding shotgun with his owner.

A Russian woman’s incredible bond with a Himalayan bear has gone viral after she shared photographs of the two of them together.

Veronika Dichka started looking after Toptyzhka in 2020 after the safari park where he lived went bankrupt.

She was friends with the owners of the park near the Siberian city of Novosibirsk and had already formed a strong bond with the bear. So when they needed to find a new home for him, Veronika welcomed him with open arms.

“They brought him to me because they weren't able to look after him and didn't need him. So I became his guardian,” the 24-year-old says.

She and the bear are now inseparable.

“He sees me as a member of his family, we share food, he sleeps in my arms when afraid and he hides behind me.”

Before Toptyzhka landed up at the safari park, he was part of a circus act and was starved and maltreated.

He was born into captivity, which is why he can’t be returned to the wild, Veronika says.

“He has lived in captivity his whole life.”

But these days Toptyzhka gets to spend plenty of time outdoors, climbing trees and taking walks with his new human owner.

Although bears have a reputation of being aggressive, Veronika says this is unfair and she’s hoping to change people’s opinions of them with the pictures and videos she shares.

“I think it's important for people to realise that any animal is capable of friendship and trust with human beings, like this bear, if you take care of it and treat it properly and with respect.”

Whether he’s fishing, dancing or even driving with Veronika in her car, Toptyzhka is just like any regular pet – just much bigger.

“While travelling in the car, Toptyzhka behaves quite calmly, although he sometimes loves to play with the seatbelt by pulling it out,” she says.

“He was interested in the steering wheel, he was also having a great time turning the lights on and off with his nose.

“Toptyzhka spends every day with us and is madly in love with water. He loves it very much when I take him to new places.”

Veronika believes she’s formed an unbreakable bond with the beast, which is the reason she isn’t afraid of him.

“I feel safe because there’s a connection between us,” she says.

“He’s attached to me and that allows me to train him. I take care of him every day, including feeding, drinking, walking and even bathing him.”

Veronika isn’t the only woman raising eyebrows for her unconventional friendship with an animal.

Lisa van Kula Donovan has been dubbed a modern Steve Irwin of the insect world.

READ MORE | ‘I love its brutal scent’: bodybuilder who married sex doll is now in love with an ashtray

The Australian-based entomologist (scientist specialising in insects) has shared details of some unusual interactions with spiders, grasshoppers and even cockroaches.

She uses her Instagram page and shares bizarre facts about the creepy-crawlies and the importance of keeping them alive.

Recently she shared progress on the development of a huntsman spider she named Charlie.

“I wanted to raise this baby huntsman from start to finish so maybe people will see how long it takes, how much growing and moulting it takes to get to adulthood,” she writes.

“And maybe when they are surprised by one they won’t just kill it.”