Dawn Dorland in 2015 after donating a kidney to patients with little chance of finding a living donor. (PHOTO: Facebook/Dawn Dorland)

Talk about a plot twist! Two American authors have become a source of fascination after one accused the other of stealing her life story to write a book about it.

When American writer Dawn Dorland donated a kidney and wrote about it on Facebook, she never expected her posts would spark a bitter feud and culminate in a lawsuit with former friend and fellow author Sonya Larson.

Dawn and Sonya met 13 years ago at a creative writing centre in Boston in the US. But their friendship fell apart when Dawn accused Sonya of using her experience as a kidney donor as the material for Sonya's book.

In 2015, Dawn donated a kidney after reading about the living kidney donation programme, where people donate kidneys to any compatible person on the organ recipient waiting list.

She wrote about her donation in a series of posts on a private Facebook page she created specially to document the process and also wrote an open letter to the recipient, whom she subsequently described as a “local father of 12” and with whom she eventually made contact. 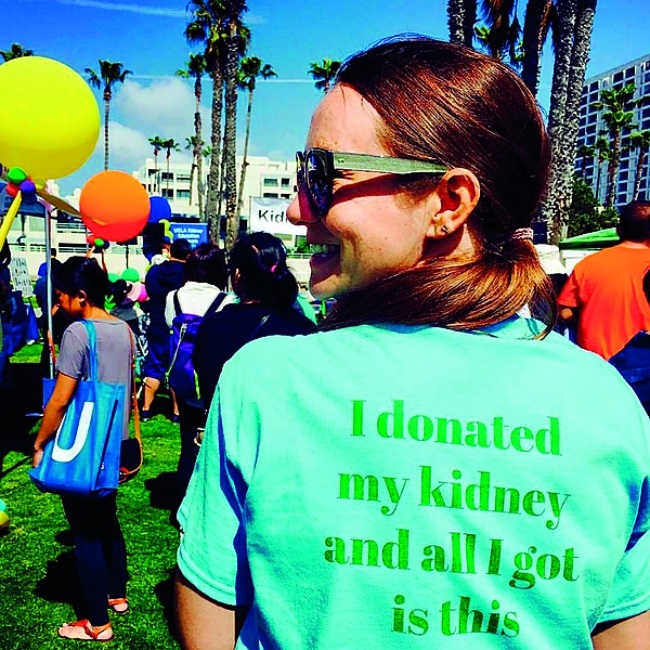 “Six weeks later, we're doing great! I’ve met his family & we’ve become friends. Prior to reading about living kidney donation six years ago, I wasn’t aware that what I didn’t need could be so valuable and safely made available to someone else,” Dawn wrote.

Many of her relatives and friends commented on her posts, but Sonya, who belonged to her Facebook page, did not.

When Dawn contacted her to ask if she had been reading her posts, Sonya replied, “Oh, yes, I learnt of it on Facebook . . . What a tremendous thing!”

Then a year later, Dawn heard that Sonya had read an unpublished short story at a bookshop, about a woman who had donated her kidney to a stranger.

READ MORE | The tale of two sons: one died, the other survived and their moms became best friends

Dawn tried to get clarity from Sonya, asking her several times if it was her story. Eventually Sonya said her story had been partially inspired by Dawn’s kidney donation.

But it wasn't 100% about Dawn, Sonya insisted. “The story isn’t about you,” Sonya said, “but about narrative possibilities I started thinking about.”

Sonya called Dawn a “bad art friend” – someone who disregards the freedom of expression of another artist.

Dawn told The New York Times that she'd told Sonya her behaviour was “deceptive” and “weird”. She decided to leave it at that – until American Short Fiction magazine published Sonya’s story, titled The Kindest, in 2017.

Sonya, who is biracial – her mother is Chinese, and her father is Swedish – said her story was about white saviourism, the acts of white people who consider themselves the saviours of other races. The motives of the donor in The Kindest weren’t selfless, she said, but self-glorifying.

The story included a letter from organ donor to recipient – and to Dawn it looked pretty much the same as the one she'd written to the recipient of her kidney.

She was furious when The Kindest was chosen for the Boston Book Festival’s One City One Story programme in 2018, and 30 000 copies were to be distributed free during the festival.

Sonya’s lawyer countered by saying that Dawn’s behaviour amounted to harassment, slander and wrongful interference into her contractual obligations. Sonya Larson maintains that her short story is “not Dawn's story”, but fiction with criticism of a social issue. (PHOTO: Larsonya.com)

Dawn offered to settle with Sonya for R74 000 in damages, which she said was to cover her lawyer’s fees, plus an acknowledgement of her original letter to her organ recipient, but Sonya ignored the proposed offer.

Then came another twist: Dawn came across an audio version of Sonya’s story online, where the fictional donor’s letter was identical to Dawn’s open letter.

Sonya had apparently only altered her story’s version of the letter after Dawn’s initial enquiries to her in 2016.

Dawn increased her claim to R148 000 and Sonya maintained her story wasn’t based on Dawn’s experience at all, stressing it was a criticism of white saviourism.

She implied Dawn may have been racist for demanding explicit identification and credit for the work of a person of colour.

Dawn refused to back down and the festival organisers cancelled the free distribution of The Kindest.

Dawn is still suing Sonya for damages, now to the tune of R221 000 with a penalty clause of an additional R2,6 million if she ever plagiarises Dawn’s work again.

Her case before the federal court involved copyright infringement of the letter and emotional suffering, including depression, anxiety, panic attacks and insomnia.

Sonya is counter-suing Dawn for defamation.

Events took a dramatic turn when a string of texts and emails between Sonya and her friends about her short story and Dawn’s kidney donation were submitted as evidence in court earlier this year.

“I’m now following Dawn Dorland’s kidney posts with creepy fascination,” a fellow writer and friend wrote to Sonya, who responded with, “Oh, my God. Right? The whole thing – though I try to ignore it – persists in making me uncomfortable. I just can’t help but think that she’s feeding off the whole thing. #domoreforeachother. Like, what am I supposed to do? DONATE MY ORGANS?”

In 2016 Sonya wrote a text message to a friend, saying, “Dude, I could write pages and pages more about Dawn. The woman is a gold mine!”

The most damning evidence, though, is this text of Sonya’s: “I think I’m DONE with the kidney story, but I feel nervous about sending it out b/c it literally has sentences that I verbatim grabbed from Dawn’s letter on FB. I’ve tried to change it but I can’t seem to – that letter was just too damn good. I’m feeling morally compromised/like a good artist but a sh***y person.”

The saga continues to simmer on social media. Writers – including Helen Rosner and Celeste Ng, the author of Little Fires Everywhere – and a friend of Sonya’s defended Sonya’s right to find inspiration wherever she wants.