This adorable pooch is trained to offer comfort and cuddles to those who desperately need them before heading out to catch some waves with his patients.

And the seven-year-old poodle's blue Mohawk just adds to his friendly charm.

READ MORE| Paris Hilton hires a detective, a psychic and a dog whisperer to find her missing pooch

Scooter, who lives in Chichester, England, offers a shoulder to cry on and a non-judgmental ear to children and young people dealing with a range of physical and mental-health issues. 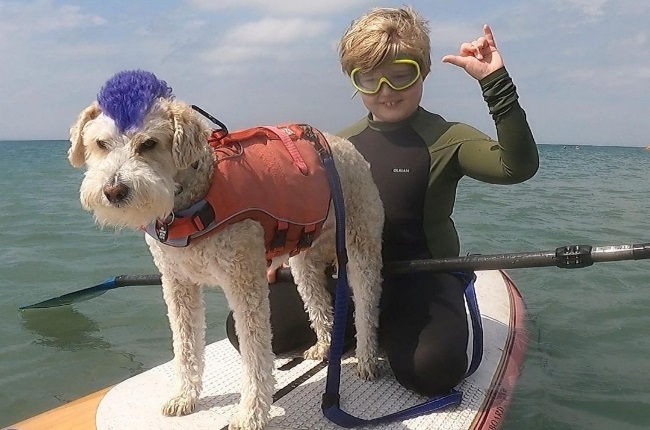 Scooter helps kids with physical or mental-health issues to get the most out of surf therapy. (PHOTO: Instagram/scooter_surf_therapy_dog)

He and his patients start off seated in a circle on the beach, talking about the situations that brought them there, and Scooter gives a cuddle to whoever is talking at the time.

They then head to the water where they take turns riding with Scooter on his surfboard and getting some wave therapy.

“There was one boy who wouldn't even get out of the car on his first session," recalls Scooter's owner, Kirstie Coy-Martin (48). “After a couple of weeks he was surfing on his own with Scooter, and his mom said he's like a new boy."

Before Scooter found his niche in helping others, he was just a stray in Portugal who needed his own rescuing. Kirstie, a British police officer and a mental health first-aider, adopted Scooter after a friend sent her a picture of him.

“I knew I had to adopt him,” she says. “He was looking at the camera and it was like his eyes reached into my soul.”

She began training him as a therapy dog a few months after she adopted him. He always brings a smile to the faces of the patients he visits. (PHOTO: Instagram/scooter_surf_therapy_dog)

He completed his training and began working as a qualified PTSD (post-traumatic stress disorder) assistant dog to comfort patients at nursing homes and hospitals via a charity.

“If we visit a hospital or care home, he has a sixth sense for who’s the most ill, or who’s missing their own dog, and he makes a beeline for them,” Kirstie says.

Kirstie took Scooter through the process of becoming a surf-therapy dog after seeing something about them online and receiving a training pack for him.

"At first, it was just putting a surfboard in the garden and getting him used to stand on it, then putting it on pillows and cushions so he could balance. Scooter and his owner, Kirstie Coy-Martin, are a powerful duo in the water. (PHOTO: Instagram/scooter_surf_therapy_dog)

"From there we went to a dog swimming pool,” she notes. “Then we were going out to the beach on calm days, and now he can surf on his own.