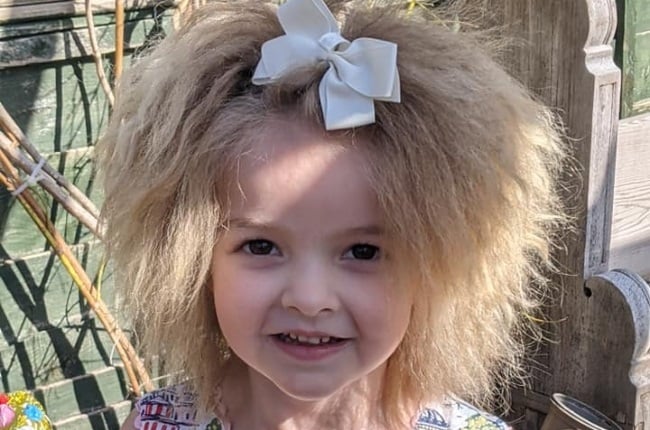 Florence Patterson was diagnosed with uncombable hair syndrome at the age of three. (PHOTO: Facebook)

Six-year-old Florence Patterson from Newcastle, England, was diagnosed with uncombable hair syndrome at the age of three. The condition is characterised by dry, frizzy hair that can't be combed flat – in other words, it pretty much has a life of its own.

It affects only 100 people worldwide and occurs when the hair follicles are heart-shaped instead of round.

“We noticed quite early on that her hair was unusual but we just thought it was funny.

“When she was about three, we were selling a table on Gumtree and the man who came to pick it up was a GP and he suggested we take her to a doctor to get checked out.

“He thought she had some kind of syndrome, so he thought it was important to get her heart and eyes checked just in case something was wrong. But she was diagnosed with uncombable hair syndrome which just affects her hair and nails. Her nails grow incredibly fast and we have to clip them twice a week.”

READ MORE | Splurge or save? When to buy salon products and when supermarket goodies will do

The parents say the youngster’s hair is nearly impossible to comb but they’ve found their own way of detangling it.

“Combing her hair is impossible so we wash it in the bath – not in the shower because it doesn’t soak up water and will stay bone-dry,” says Kyle, who’s a lawyer.

“We towel-dry it; leave the conditioner in; scrunch it; and pick out all of the dreadlocks, which takes ages.

“The next day she’ll have the most fabulous, blonde curls. Then the next day it’s frizzy again.”

The little girl’s hair draws attention wherever she goes. “Everyone in the area knows her as the baby with the hair,” her mom says.

“She’s always attracting attention. She’s got loads of friends because her personality shines through.”

READ MORE | Grey hair? Don't care! These celebs are at the forefront of the grombré trend that embraces natural, undyed locks

Although most of the attention she receives is positive, Florence occasionally faces derogatory comments about her hair from strangers who don’t know she has a medical condition.

“Florence is aware that everyone stares at her.

“Strangers touch her or grab her hair so we've taught her to tell them off and tell people that they can't touch her.”

The condition is similar to Albert Einstein’s, Jill says, so she’s in good company.

Florence is a confident child, she adds.

“We know some people will define her by her hair so she just needs to embrace it.”

We live in a world where facts and fiction get blurred
In times of uncertainty you need journalism you can trust. For only R75 per month, you have access to a world of in-depth analyses, investigative journalism, top opinions and a range of features. Journalism strengthens democracy. Invest in the future today.
Subscribe to News24
Related Links
Top stylists share 5 fantastic insider tips to banish bad hair days
Miracle plant: why you should use Aloe vera in your skin care and hair routine
Mossel Bay teen cuts her 1,4m-long hair to benefit cancer sufferers
Next on You
Man with Popeye arms desperate to get rid of the muscles that could kill him