Third time's a charm! This mom has given birth to three daughters on the same date, three years apart Kristin and Nick Lammert with their daughters, Sophia, Giuliana and Mia, who were born three years apart on 25 August. (PHOTO: Facebook)

She'd never have gambled on giving birth on the same date three times – but that's exactly what happened to Kristin Lammert from Florida in America.

Though the couple had planned their pregnancies, they were stupefied when Mia was born on 25 August.

“It’s very unique," Kristin says. "Honestly, I don’t understand it myself. Sometimes I go and stare at their birth certificates. I’m like, ‘They actually all have the same birthday'”.

When the couple decided to start a family, they knew they wanted each baby three years apart. Kristin and Nick planned their first child for August to coincide with the number of big holidays in the USA around that period.

They planned their second baby three years later and for their last one they aimed for a September 2021 due date so the baby wouldn't be the youngest in the class when she's old enough to start school.

The pair were stupefied when Mia arrived on the same date. 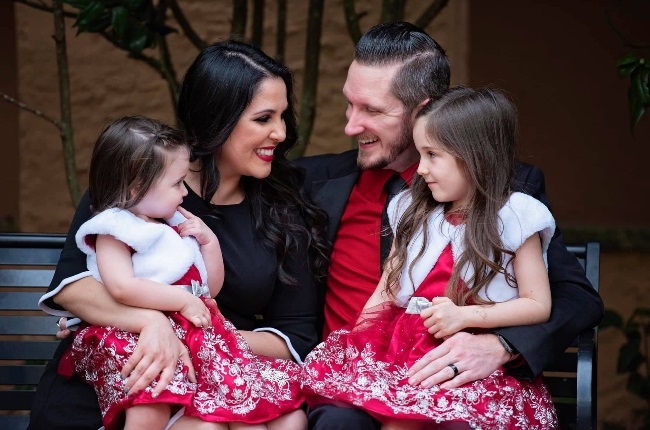 The couple didn't imagine their children would all be born on the same day, but they are thrilled with their trifecta. (PHOTO: Facebook)

The little girl was supposed to be born in September, but 10 weeks into the pregnancy Kristin tested positive for Covid-19. She was also diagnosed with preeclampsia, which caused her blood pressure to spike.

Doctors warned she might go into early labour and even though Sophia joked she'd be getting another sister for a birthday present, Kristin (32) didn't imagine it would happen.

"The date doesn't just automatically line up," she says. "My doctors were not going to induce me just because the date sounded cool. But by my third one, I'm like, 'Wow, this is kind of like freaky fate.'"

Because the couple didn't want Sophia and Giuliana to feel overlooked on their big day, they threw a birthday party for them a week before Kristin's labour was induced. Though most kids would be sad to share a birthday with one sibling, let alone two, Kristin says they pull out all the stops to make each child feel special on their birthday.

She and Nick make sure each girl gets their own cake so they can blow out their own candles. They also ensure that each daughter has the same number of gifts and invites their own friends to their parties.

Having multiple children born in the same family on the same day is extremely rare, but it's not unheard of. Twin sisters Amber Tramontana and Autum Shaw when they were pregnant with their sons in 2018. (PHOTO: Facebook)

The twins, who are from Tennessee in Nashville USA, went into labour on their birthday on 29 October. Autum was the first to give birth to her son Charleston, followed by Amber, who welcomed Blakely into the world. The sisters also have three-year-old sons who were born 10 weeks apart.

“We didn't plan to get pregnant at the same time, but we’ve always done everything together our whole lives," Autum said at the time. "We went to nursing school together, we went to grad school together, we had our boys and now we have our girls. So it's almost like, what's next?"

The two also had their babies delivered by the same doctor.

"You couldn't have planned this. God made our story very, very special, and all the little details came together for a big, beautiful picture, and I'm so thankful for that."

For Amber, their daughters were an an "incredible" birthday present. "Our prayer is that they grow up having the same bond that we do,” she says.

There's also the case of three American sisters who gave birth on the same day at the same hospital. Daneesha Haynes, Ariel Williams and Ashley Haynesurs from Ohio all gave birth over a span of four-and-a-half hours on 3 July 2020.

Ariel (20) was the first to give birth that day when she welcomed her daughter, Sincere Young at 10:10am. Ashley (27) gave birth to her son Adrion Haynes at 11:26 a.m and Daneesha (25) completed the trifecta with little Emrie Haynes at 2:43pm.

Although the sisters had different due dates, Dr Edroy McMillan, who delivered all three babies, had to induce labour because of complications.

The sisters, who have nine children between them, say their older kids are already close.

"It was a blessing. It's amazing. This kind of blew everybody away," Daneesha says. The three sets of McKee twins were all born within a five-year span. From left: Andrew, Abigail, Aiden, Jaiden, Payton and Paige. (PHOTO: Instagram)

Jolene and Andrew McKee from Brooklyn in New York may not have had several children born on the same day but they were blown away when they had three sets of twins in five years.

Peyton and Page are five years old, Abigail and Andrew are three, and Aiden and Jaiden are three months old.

After having a miscarriage six years ago, Jolene was worried she might never become a mom, but three months later Jolene (33) discovered she was expecting twins.

“I couldn’t believe it, it was beautiful,” she says.

When she fell pregnant again two years later she was sure it wouldn’t be another set of twins – after all, the chances of this happening stand at around 12 500 to one. So imagine her surprise when she found they’d soon be a family of six.

When she fell pregnant a third time, her odds of having twins rose to a staggering 1,4 million to one.

She’s especially pleased that her twins are in “all three combinations” – girl twins, boy twins and boy-girl twins.

Jolene believes her “overactive uterus” is responsible for all her twins. Two eggs are released when she ovulates, upping her chances of conceiving non-identical twins.

Jolene and her husband have their hands full with all the kids but the couple consider their kids a blessing.

“I love our family and I wouldn't have it any other way," she says.

We live in a world where facts and fiction get blurred
In times of uncertainty you need journalism you can trust. For only R75 per month, you have access to a world of in-depth analyses, investigative journalism, top opinions and a range of features. Journalism strengthens democracy. Invest in the future today.
Subscribe to News24
Next on You
I love you this much: husband builds wife her own Taj Mahal

Read more on:
childrentwinspregnancy
LATEST YOU