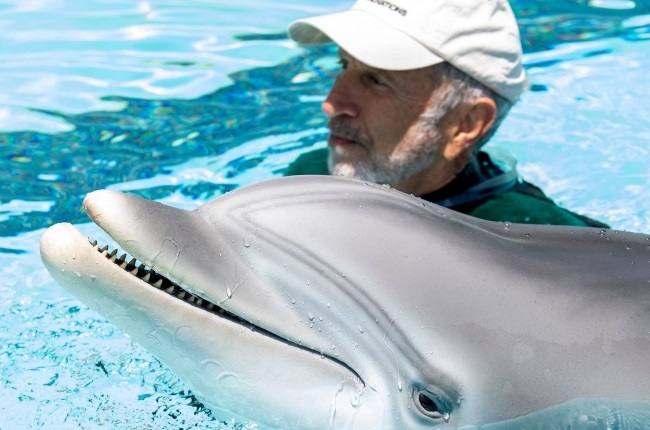 These hyper-realistic dolphins that have been 20 years in the making could possibly soon be permanent fixtures in aquariums, ensuring that real dolphins will never have to suffer the boredom of captivity.

Roger Holzberg, a former creative director for the Walt Disney Company, is helping people reimagine aquariums and their sea life with the help of an animatronic dolphin named Delle.

He created the robo-dolphin in collaboration with Edge Innovations, a San Francisco-based company that specialises in unique technology-based systems such as submersibles.

“The goal of this initiative is to reimagine the entertainment, educational and business potential of the marine animal industry,” Roger (67) explains.

“Real-time animatronics are hyper-real creatures capable of delivering any experience you can imagine.” The 2.0 version robotic creature, which closely resembles a real-life bottlenose dolphin, weighs about 270 kg and is 2,5 m long – so it's roughly the same size as an adolescent dolphin.

Roger hopes that this will be the first of many innovations and sees a future where aquariums might be populated with robo creatures that can either move autonomously or be partially remote controlled to create a more engaging experience for theme park goers.

“From dolphins sharing their dreams with your children, to great white sharks inviting you to be a part of their feeding frenzy, to sea dragons breathing fire in a night-time fountain show,” he says.

“Safe, up close, personal engagement with the creatures of our world ocean is finally possible.”

His Delle prototype is so realistic it's hard to distinguish it from an actual dolphin. It is equipped with special artificial intelligence and can come up for air, dive and swim.

“The detail goes so far as to actually integrate fat bladders to be sure that the buoyancy and the feel of it when you actually touch it or move with it or bump against it feels like its real life counterpart,” Roger says.

The filmmaker’s invention was inspired by the desire to liberate real-life dolphins from aquariums where they're often forced to sacrifice their freedom for the sake of profitability and human entertainment.

The AI-mammal cost £18 million (R360 million) to develop. While this price is steep, Roger believes that it will become cheaper over time. He hopes that Delle will become the first of many prototypes that will change the way humans see ocean life such as sharks and whales.

“My hope and my dream is that children who interact with these dolphins will fall in love with the ocean and the creatures that live with them and will grow up to preserve them.”