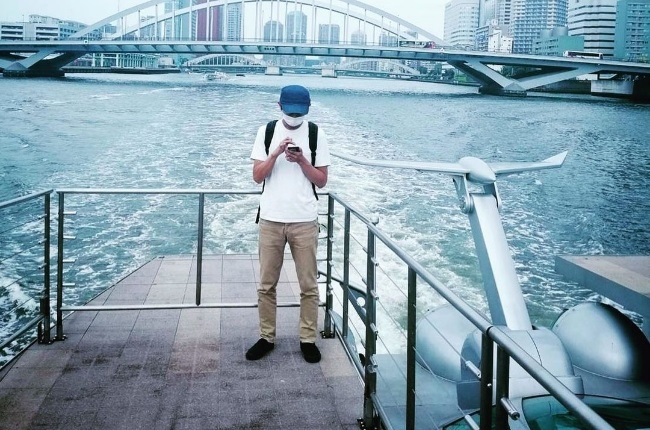 Shoji Morimoto has made a name for himself by renting himself to clients as the "do-nothing-guy". (PHOTO: Twitter@Morimoto_shoji)

He’s always there for you when you need him to be, will do the bare minimum, then leave when you tell him to. No strings attached.

Shoji Morimoto, a 38-year-old husband and father-of-one from Tokyo, Japan, hires himself out as the “do-nothing-guy".

He won't put up your shelves or help you with chores – instead, what he provides is simple companionship to people who are feeling lonely or are too shy to venture out alone.

Morimoto will share a meal with you, provide you with moral support as you file for divorce, listen to you vent about your soul-crushing job or keep a place for you in line, all for the price of ¥10 000 (R1 236). He often goes to lunch with people who don't like eating alone. (PHOTO: Twitter@morimotoshoji)

"I'm not a friend or an acquaintance," Morimoto tells CBS News, "I'm free of the bothersome things that accompany relationships but can ease people's sense of loneliness."

He has often been told by people that he's a passive "do-nothing", who just blends into the background and he decided to put this talent to use one day in 2018 after finding himself jobless.

Morimoto, who has a degree in physics, created a Twitter account with the handle "Do Nothing Rent-a-Man" to advertise his services.

Now he sees up to four clients a day.

In his line of work, every day is an adventure. He admits he's constantly astonished by the different personalities, settings and situations he encounters. Morimoto is very in demand and sees as many as four clients a day. (PHOTO: Twitter@morimoto_shoji)

He has joined the severely self-conscious on outings to stores and restaurants, waited in the bitter cold to be a struggling street musician's audience, shared a cake with someone who was alone on their birthday and even accompanied a hospital patient to revisit the place where they attempted suicide.

Although many of his clients are women, he's had some poignant interactions with men.

He once shared a home-cooked meal with a male client who revealed that although his toxic mom had raised him to be a criminal, which had led to him being arrested for his role in a heist that ended in a person's death, he still yearned for her.

READ MORE| Are you a workaholic? How to tell if you're addicted to your job and what to do about it

With more than a quarter of a million followers on Twitter, he's constantly on the move, meeting up with clients. Morimoto was once asked to accompany a woman to look at a ring after her fiancé left her for being diagnosed with cancer. (PHOTO: Twitter@morimotoshoji)

Now with four novels, including a manga comic, all based on his experiences and the royalties he earns off the 12-part semi-fictionalised Amazon Prime series that he inspired with his signature backpack and blue cap, Morimoto is able to support himself financially.

Japan has seen a concerning increase in the number of female suicides attributed to the Covid-19 pandemic which has amplified residents' loneliness and social isolation.

The country has even gone so far as to appoint a "minister of loneliness" to address the issue.

“Even if people look normal and fine on the surface, they often have shocking pasts or secrets or impossible problems,” Morimoto says.

“People who come to me with crazy problems, they’re usually not people who look like they’re suffering . . . Everyone, even the ones that seem well, all have their own sets of problems and secrets.”

We live in a world where facts and fiction get blurred
In times of uncertainty you need journalism you can trust. For 14 free days, you can have access to a world of in-depth analyses, investigative journalism, top opinions and a range of features. Journalism strengthens democracy. Invest in the future today. Thereafter you will be billed R75 per month. You can cancel anytime and if you cancel within 14 days you won't be billed.
Subscribe to News24
Next on You
He killed his wife 40 years ago – and has only now been found guilty thanks to a podcast