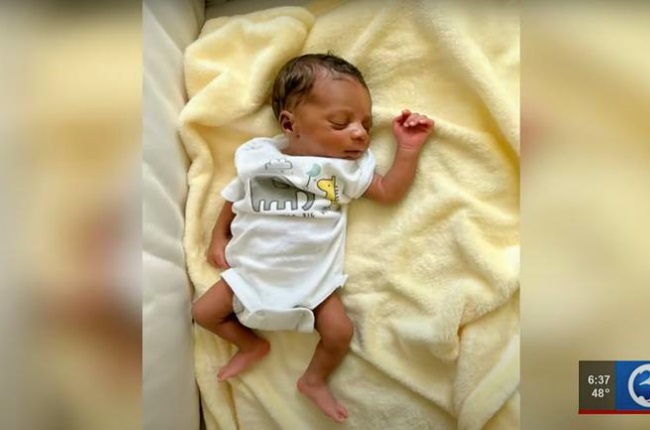 What was meant to be an American woman's last holiday before she gave birth took an unexpected turn when she went into labour during the flight.

Kendra Rhoden's baby wasn't due for six weeks, so she thought she'd enjoy one last hurrah with her sister, Kendalee, before becoming a mother.

Kendra, who's from Hartford, Connecticut, was on board an American Airlines flight to the Dominican Republic when her waters suddenly broke.

She was taking a nap when she felt the baby kick. Skylen's mom, Kendra, was travelling from the US to the Dominican Republic when her waters broke on board the plane. (PHOTO: Wfsb/youtube/beem/megazinefeaures.co.za)

Although nurses on board rushed to her aid and asked her not to push, her son couldn't wait to make his arrival and was delivered mid-flight.

Kendra has named him Skylen in honour of where he was born, and while he’s a US citizen, his birthplace is reportedly recorded on his birth certificate as “in the air”.

In a TikTok video shared by Kendalee, Kendra is seen being pushed in a wheelchair while cradling her newborn minutes after giving birth as other passengers clap and celebrate the once-in-a-lifetime experience.

"This is how my vacation is going,” Kendalee captioned the post.

In another clip, she thanked the nurses who helped her sister give birth.

"We really appreciate you for all the hard work you did that day because we know how things really could've gone. We know it's not easy to deliver a baby on an airplane,” she says.

Upon landing, Kendra and her son were transferred to the nearest hospital where they were given proper medical attention. Because the baby was born prematurely, doctors only discharged mom and son when he was strong enough to make the flight back home to Connecticut.

Is it safe to fly during pregnancy?
If you're experiencing a healthy pregnancy, taking a commercial flight before 36 weeks is generally considered safe, according to Mayoclinic. But it's recommended that you consult your doctor before flying.

The pair have since returned to Hartford where Skylen is going from strength to strength.

“I feel good now because I’m home and he’s safe. He’s where he needs to be right now,” Kendra says.