WATCH | He’s short and stout but Ollie the oinker is no teacup piggie! 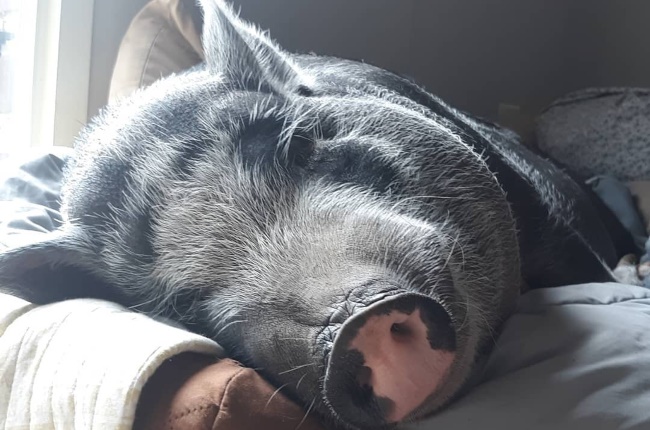 Ollie first weighed 5kg when he first lived with his family, he now tips the scale at a hefty 100kg. (Photo: Instagram/@ollieandthecrew)

Teresa Ruddell will never forget the day her bae, Don Plemmons, brought home the bacon. “He told me there was a sale at the store and he’d come back with loads of bacon and pork chops,” she says.

At the time, Teresa was a vegetarian She’s a vegan now. “I couldn’t believe it when he had the cheek to ask me to help unload it all.”

But Don had a surprise in store. “I opened his car – and there was Ollie in a crate looking up at me. I was in utter disbelief and shock. Don told me I deserved to be happy and he wanted to treat me.”

Teresa, from Georgia in the USA, had for years been saying she wanted a teacup pig as a pet, and Don found a local breeder where he bought Ollie.

Weighing just 5kg, Ollie was a tiny bundle of cuteness. He was the perfect little micropig – until he wasn’t!

“Looking back now, we didn’t do what every pet owner should – research,” Teresa admits.

If you didn’t already know, there’s no such thing as micropigs, or teacup pigs, which became popular more than a decade ago when celebs started toting them about. They’re just little piggies who grow up to become big pigs, as Teresa and Don discovered.

Kunekune pig breeder Kevin Kersley, the chair of the British Kunekune Pig Society, confirms that micropigs are a myth.

“Unscrupulous people tend to breed the runts of the litter to try to decrease the size of the pig, but genetically the original size is built into the offspring, even though its parents may be small. I’d imagine there would be some Kunekune in there, to start off with a small size.”

Though Ollie now tips the scale at a hefty 100kg, his human family still love every ounce of him.

“Whatever animal you give me, I’d never give it up, so it never was a big thing for me. He’ll always be mine,” Teresa says.

Ollie fitted in like a dream with her other animal kids: a dog and four cats.

The smart and sociable porker is firm friends with their dog, Tazz, and very quickly started behaving like a dog.

“When Tazz and the others are barking in the garden, grunting Ollie is right on their tracks.” And just like Tazz, he chases after balls and chews sticks.

He’s not fussy when it comes to food either. He devours everything, from raw pumpkin to peanuts, ice cream, the roots of plants and bark of trees.

And at home he “really is just our baby. He has his own room with a tepee where he likes to sleep. He’s truly a spoilt pig!”

We live in a world where facts and fiction get blurred
In times of uncertainty you need journalism you can trust. For 14 free days, you can have access to a world of in-depth analyses, investigative journalism, top opinions and a range of features. Journalism strengthens democracy. Invest in the future today. Thereafter you will be billed R75 per month. You can cancel anytime and if you cancel within 14 days you won't be billed.
Subscribe to News24
Related Links
Woman spends a small fortune on pooch’s fart treatment only to find out it’s her husband
Why Lewis Hamilton is getting backlash for his dog’s vegan diet
Is your pet overweight? Check these warning signs and get your best friend back on the straight...
Next on You
This balloon artist is blowing up with his life-size inflatable sculptures