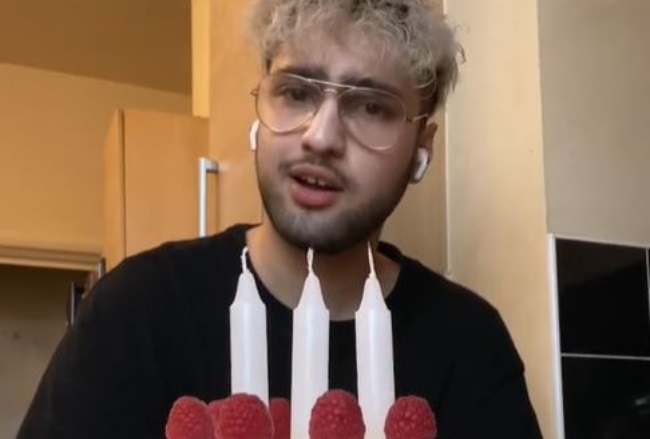 Emojis can say a thousand words – how you feel, what you’re doing and even what you’re craving. Now a home chef from England has gone viral for breathing life into the little icons of goodies millions of people use every single day.

Ash Barber found fame on social media when he started recreating food emojis in his kitchen. The 20-year-old’s first hit was the popular birthday cake, which he made using white icing, raspberries and white table candlesticks. “I wanted to see what it would look like in real life,” Ash says.

After posting the video of the cake he baked, which was supposed to be a once-off experiment, his followers requested he recreate more emojis. Now it’s become a much-loved baking series featuring the doughnut, croissant and cupcake emoji.

Ash, a digital marketing student from Manchester, is thrilled by the response. “I follow so many people on TikTok who make food videos, and they're the professionals.” He’s just making it up as he goes along, he ways.

Ash, who’s previously taken a two-year course in baking, recommends first-time bakers not use his page as a reference. “I do focus more on the comedy side. If someone wants to learn how to make something, I would never recommend them to come to my page.

READ MORE | No stove? No problem! Check out these unconventional cooking hacks

“It's me trying it for the first time. I'm just trying to figure it out, I don't really know what I'm doing.”

Still, his baked emojis are quite a hit: Ash has gained more than 793 000 followers and 18,8 million likes on the social media platform.

Check some of his amazing creations below:

We live in a world where facts and fiction get blurred
In times of uncertainty you need journalism you can trust. For 14 free days, you can have access to a world of in-depth analyses, investigative journalism, top opinions and a range of features. Journalism strengthens democracy. Invest in the future today. Thereafter you will be billed R75 per month. You can cancel anytime and if you cancel within 14 days you won't be billed.
Subscribe to News24
Related Links
Get cooking: fun recipes that you can make with your kids
Cooking for a cause! Self-taught chef cooks up an incredible campaign during lockdown
The Duchess of Cambridge reveals her most-used emojis – and they might surprise you
Next on You
How Msituni the giraffe is walking again thanks to custom braces