They got burnt on nearly 50% of their bodies when a container with flammable liquid exploded.

Now, seven weeks later, they can at last continue with their lives.

Jaco Badenhorst (13) and Marius Mathee (30) were preparing for a braai on a Saturday in May when the freak accident happened.

"Jaco is still a bit hoarse because his lungs and vocal cords were burnt and he’s scared of fire now. He also has nightmares, but he’s recovering well," his mother, Mariette Mans, told YOU.

Marius and Jaco were lighting the braai fire at Marius and Kyla’s rented home in Krugersdorp when the container of flammable liquid exploded. They suspect that fumes from the container had caught alight. They didn’t realise the container was standing so close to the flames.

"They jumped into the pool immediately. Jaco had burns on 42% of his body. The worst was his neck and under his arms, which were third degree burns. Those on his face were second degree burns," Mariette explained.

Her future son-in-law was much worse affected by the accident.

"Marius had burns on 48% of his body [and] very bad wounds especially on his chest. He was kept under sedation for three weeks in a private hospital."

Jaco was sedated for two days and discharged after nine days in a state hospital, she said.

Mariette says doctors and family have been surprised by their swift recovery.

"Neither of them have had skin grafts, although the doctors initially thought it would be necessary." 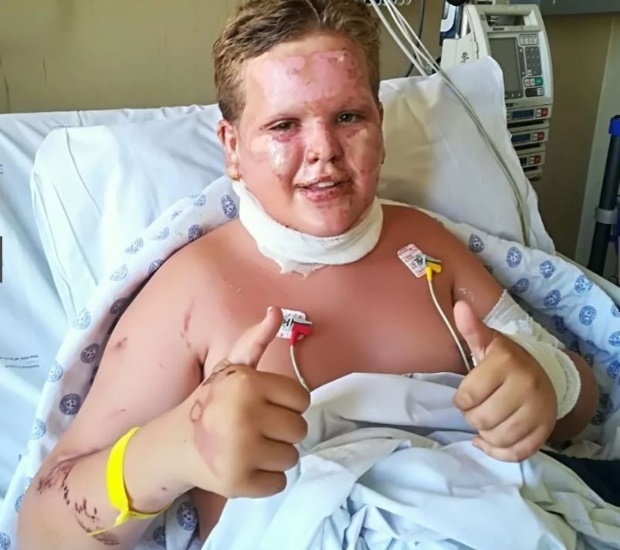 Mariette, who has advanced cancer of the cervix, says the family has a lot to celebrate.

"I had my final round of chemotherapy last week."

"And Kyla and Marius’ baby girl, Isabella, has turned one, so we’re partying this weekend," she says.

"I think it’s by the grace of God that Marius and Jaco are recovering so well... plus all the prayers. I can’t tell you how supportive people have been towards us. We’re so grateful," she says. Jaco will be back at school next week. He attends Noordheuwel High School.

Marius, a mineworker, expects to return to work on July 15.

We live in a world where facts and fiction get blurred
In times of uncertainty you need journalism you can trust. For 14 free days, you can have access to a world of in-depth analyses, investigative journalism, top opinions and a range of features. Journalism strengthens democracy. Invest in the future today. Thereafter you will be billed R75 per month. You can cancel anytime and if you cancel within 14 days you won't be billed.
Subscribe to News24
Related Links
Pippie’s mom starts a job after seven years: “I have to do something for Anicè”
Next on You
Fourth monkeypox case recorded in SA – here's all you need to know about the global health emergency