Local family on raising a hyena as a pet: ‘He behaves like a dog’ They're among the most feared animals that hunt in packs in the wild – determined scavengers with jaws of steel and razor- sharp canines that can crush whole carcasses  and rip just about anything to shreds.

But try telling that to these two little girls. As far as they’re concerned, the  hyena that lopes up to them is as harmless as a hamster. “Is that nice, Delta?” asks Lienkie van Wyk (5) as she and her younger sister, Hylene (3), stroke the animal’s head and rub its belly when it blissfully flops over onto its back. On this farm, hyenas rule – when they’re young, anyway.

The girls’ grandfather Nico Roets and his previous hyena pet, Petrus, became something of a social media sensation recently when a video of the two went viral. In it, Nico sits on his stoep stroking the contented creature while it laughs like, well, a hyena.

Nico’s wife, Karen, took the video about 18 months ago and sent it and pictures of Petrus to a family friend – and didn’t think of it again until the friend came across the video again and uploaded it to Facebook.

It was shared thousands of times, which took Nico and his family by surprise. “We couldn’t believe the reaction it got,” he says when YOU visits him on Weltevreden, his game and guest farm in the Free State. Petrus was eight months old when the video was shot and has since been transferred to another farm in the Vredefort Dome where he’s part of a breeding  programme.

Eight-month-old Delta has now taken his place. “He’s more energetic than Petrus but he also behaves like a dog,” Nico says. He and Karen also have an adult hyena called Fehn and a breeding pair with two cubs, all kept in separate enclosures on the farm. “For us, there’s no such thing as an ugly animal,” Nico says.

“Not many people  realise how lovable hyenas can be.” Petrus came to live with the couple when he was just a few weeks old and they handreared and bottle-fed him. From the get-go the cub loved his human family so much he’d hop onto the couch or even crawl into bed with them. 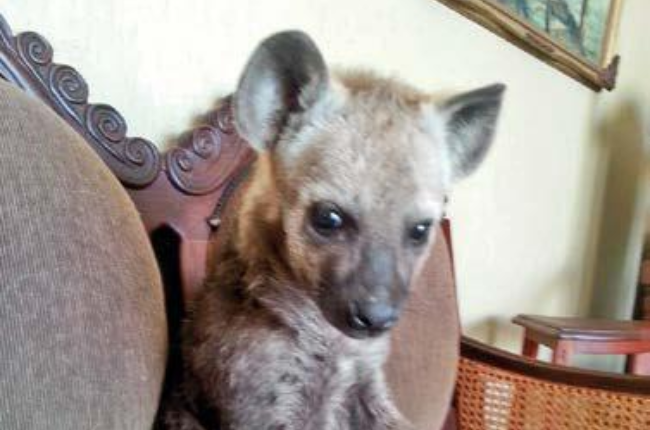 As he grew up, the restaurant on the farm became another favourite hangout. “Once he disappeared into the restroom and came trotting out with a toilet seat in his jaws,” Nico recalls. “He also loved to steal handbags. If you didn’t watch your bag closely, he’d walk around with it dangling from his mouth.

And if you ordered eisbein you had to eat it fast or Petrus would nab it from the plate. One regular customer eventually started ordering two eisbeins – one for him and one for Petrus.” Saying farewell to Petrus when it was time for him to join the breeding programme was extremely emotional,  Karen says, “but we wanted him to continue his bloodline”.

And now they have Delta, who’s also become a firm family favourite. Charlene van Wyk, Nico and Karen’s daughter, has taught her little girls to understand hyena behaviour. When its tail is down, the creature is calm; when it sticks up and the body is flattened, he’s worked up – and it’s best to stay away. Nico and one of his workers, Johan Kuhn, with hyena Fehn. (Photos: Lubabalo Lesolle) Petrus eagerly waiting in the car for Nico to take him on a drive. (Photos: Lubabalo Lesolle) The Roets family also have lions, caracals, wolves, lemurs, buffaloes, warthogs and various species of monkey on their farm. “We’re absolutely nuts about animals,” Charlene says. “When my younger brother, Nicolaas, and I were small, my dad got us a Jack Russell. He held the puppy behind his back and said, ‘Guess what I bought you?’ “The second time he brought an animal home he held his hands behind his back and told us he’d bought us a lion  – although of course he was actually in an enclosure, not behind his back.”

It’s clear Nico loves and respects his animals and there’s one important rule he always adheres to. “They’ll always be wild animals. When a hyena grows up, he’ll kill you. They’re pack animals and when they’re adults, they accept the dominant animal as leader of the pack.

“When you’re the one who raised it, you’re the dominant one in the pack and he’ll challenge you for dominance. That’s why I won’t let an adult hyena walk around freely here or treat it the way I treated Delta or Petrus.” It seems belly rubs have a sell­by date in the animal kingdom.

Related Links
Uitenhage grandmother speaks after dog attack
Eastern Cape woman saves two grandsons from dog attack
Faithful dog waits at hospital for three months after owner’s passing
Share
Next on You
My battle with Covid-19: ‘I had such terrible chest pains I just burst into tears’ 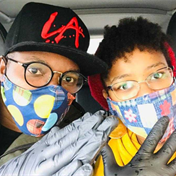