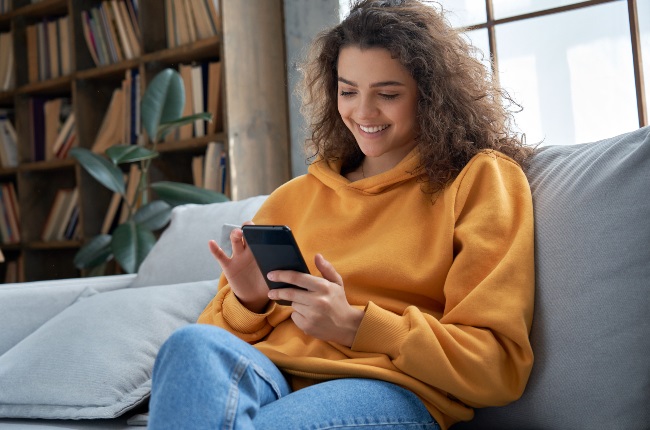 An escape from loneliness, an antidote to the brain-numbing boredom of lockdown, a deeply satisfying and pleasurable way to while away the hours . . . There are many reasons to be a fan of YOU crosswords, and readers love nothing more than applying their minds to the puzzles that have become a hallmark of our printed crosswords.

Equally passionate about puzzles are the people who put it all together.

YOU has various compilers and they’re more than happy to take readers behind the scenes of their fascinating worlds. Natalie Cavernelis enjoys compiling puzzles just as much as she enjoys engaging with YOU puzzle fanatics. (PHOTO: Misha Jordaan)

“I started working on crosswords in 2011 with the first YOU Blockbusters magazine and we were super-nervous – so many words,” says Natalie Cavernelis, YOU’s puzzle magazines production editor. “But I loved it. Only in this job would I learn ‘emmet’ and ‘pismire’ are other words to describe an ant!

“I have a file on my phone where I note cool words I want to add to a crossword or ideas for a new word-search theme,” the mom-of-one from Bellville in Cape Town says. “Just yesterday I added the words ‘compunction’ and ‘lugubrious’ after seeing one in a book and hearing the other on TV. I love how they sound.”

Crossword compilers typically use software programmes to create the various types. “It takes anywhere from 30 minutes to three hours to edit or compile a puzzle and either write or check the clues,” Natalie says.

'A small word search can be put together quickly but thinking up hundreds of new topics and enough words for the word-search topics can take time.' -Natalie Cavernelis

Putting together a puzzle is a combination of clever language skills, an incredible eye for detail and a feel for the flow of each one. Compilers develop a good sense of what words are topical at the time and which words crop up regularly in the news or social media.

“To edit a blockbuster or arrow puzzle, we go through each word and clue, then keep track of how often words have been used to ensure there aren’t too many repeats in a batch,” Natalie says.

“For example, if a word such as paediatrician is used a few times, we have to get rid of the repeats as it will annoy readers. It’s also so specific a word that there aren’t many clue options to play with.”

Trying to weed out repeats is one of the hardest parts of compiling a puzzle, Natalie says.

Another challenge is keeping the clues fresh, interesting and intriguing. “We adjust and play with the clues as much as possible. For words like ‘seal’ or ‘trail’ there are plenty of ways to keep the clues different. But words like ‘ichor’ or ‘carmine’, for example, are more limited. They can’t be run in consecutive puzzles without boring readers.

“And sometimes you have a word that seems simple but you up spending a lot of time thinking of a way to make the clue fit in a small space.”

Gerda Engelbrecht, who compiles various YOU puzzles, including colossus and codebreakers, finds inspiration for clues everywhere. For example, as soon as she starts reading a book for leisure, she comes across interesting or unusual words.

Gerda, has been working hard on YOU’s new digital platform, YOU Puzzles (www.youpuzzles.co.za). “It’s a dream project,” she says. “Online crosswords are popular worldwide and we wanted to do the same for South African puzzles. Now, for the first time, it’s possible to have video clips as clues – it’s made me think in new ways about what can be included in a crossword.”

With a picture crossword, Gerda starts by entering the pictures and filling in the names of the people. Then she puts clue boxes in strategic places, after which the programme fills in the empty boxes from the word lists she’s created beforehand. “Then you have to write the clues one by one,” she explains.

A YOU crossword page takes her about between two and three hours to compile. “I compile a list of words for each publication so that the crossword is specific to that publication,” Gerda explains.

She says YOU crossword lovers have been loyal for decades now and they’re super-smart. “I really don’t know that any clue can stump them anymore,” she says with a laugh. “You just can’t catch them out.”

Putting together puzzles is a team effort. Natalie works with closely with colleagues Lola Fourie and Elmarie Meyer to ensure YOU readers get the high-quality puzzles they’re accustomed to.

And they know they have to ensure crosswords are error-free. Natalie says YOU readers keep them on their toes and welcomes the feedback.

“They’re very vocal. They know what they like and they admire the use of a new word so we have to keep delivering and making sure clues are not stale.

“Once we have finished a section, Lola and I swop crosswords to make sure the first person working on a puzzle hasn’t made any mistakes or missed errors.”

Will Shortz, world-renowned crossword editor of The New York Times, says you just can’t please everyone and sometimes readers will complain about something being a mistake when it’s actually just a matter of preference.

Natalie has also found there are personal preferences but there are a few things that generally don’t go down well with many people. “Readers aren’t fans of repeat words,” she says.

“They also hate it if too many of a type of word pops up in a single crossword. For example, science-related or Bible-related – unless it’s themed to be that way. So we rework puzzles to prevent this from happening.

But if you get it right it’s a magical feeling.

Will believes there’s something deeply satisfying about doing crosswords. “I think humans have a natural desire to fill empty spaces,” he told The Guardian newspaper. “It gives us a sense of fulfilment, to complete a grid. When we start filling in the last squares, it brings a rush of adrenaline and dopamine. It’s a great feeling, like a little drug.”

Natalie has no doubt the new online puzzle portal is going to be a hit. “Readers often say they finish the puzzle magazines too soon and then it’s a long wait to their next puzzle fix.

“The online puzzles are perfect for them as they can just move to their phones and work their way through the bundles until we have finished putting the next issue together.

YOU Puzzles is an online platform with a variety of crosswords, including word searches, codebreakers, sudoku and crosswords. Choose from a range of packages and play your favourites on your computer, cellphone or tablet.

Step 4 Click on PAY NOW to fill in your payment details.

We live in a world where facts and fiction get blurred
In times of uncertainty you need journalism you can trust. For only R75 per month, you have access to a world of in-depth analyses, investigative journalism, top opinions and a range of features. Journalism strengthens democracy. Invest in the future today.
Subscribe to News24
Next on You
Why Jacob Zuma was released: experts on how medical parole works

Read more on:
games
LATEST YOU