A royal nod: meet the 14-year-old Cape Town boy who received the Diana Award for his conservation work Hunter Mitchell was recently honoured with the Diana Award in recognition of his rhino conservation efforts. (Photo: Supplied)

He was eight years old when he fell in love with rhinos – now Hunter Mitchell’s efforts to save the endangered species have earned him recognition from the British royal family.

The 14-year-old from Somerset West in the Western Cape has been awarded the Diana Award, established in memory of the late Princess Diana, Princess of Wales. Hunter with Harry and Meghan in 2019 at the British High Commissioner’s residence in Cape Town where he was presented with the Commonwealth Point of Light award. (Photo: Supplied)

Being honoured among other humanitarian trailblazers is no small feat, yet Hunter is modest about his achievement. “Being the only South African in 2021 is bittersweet because there are lots of other young people doing amazing things here,” he tells YOU.

Hunter became involved with conservation efforts in 2015 when he heard about a baby rhino named Osita who was found at the Aquila Private Game Reserve in the Western Cape on New Year’s Eve.

With the help of his parents, Glen and Lynley Mitchell, he started a project called Raise the Baby Rhino with Hunter to help save the abandoned calf. He raised thousands of rands to help baby Osita and when she was released back into the wild, Hunter decided he needed to do more to save the species.

“In South Africa we’re privileged to be home to some of the world’s most incredible and unique animals and it's sadly no secret our rhinos are in serious trouble,” he says. “I want to help as many orphaned and injured rhinos around South Africa to have the same second chance at life.”

In collaboration with organisations such as The Rhino Orphanage, Saving the Survivors, Rhino Art and Project Rhino, Hunter has so far managed to raise more than R300 000 for rescued rhinos. Hunter hopes to one day become a world-class vet so he can work closely with animals. (Photo: Supplied)

It’s this selflessness that earned him the Diana Award, which is presented to outstanding young people between the ages of nine and 25 for their humanitarian work and community action.

“I feel honoured to be acknowledged and be a part of something so special that includes other visionaries and leaders from around the world,” says Hunter, who is the youngest person to receive the prestigious award this year.

The Grade 8 pupil at Somerset College received the award in a virtual ceremony on Thursday 1 July – what would’ve been Princess Diana’s 60th birthday. Her son Prince Harry praised the honourees during the ceremony.

Though he might not have rubbed shoulders with any of the royals during the prize-giving, Hunter tells us he had the privilege of meeting the Duke and Duchess of Sussex during their 2019 Africa tour. The 14-year-old has collaborated with many organisations to give orphaned and injured rhinos a second chance at life. (Photo: Supplied)

“I was very excited and nervous before I met the Duke and Duchess of Sussex, but they were such kind people and so interested in what I’m doing for our rhinos,” he recalls.

Hunter met Harry and Meghan at the British High Commissioner’s residence in Cape Town and was presented with the Commonwealth Point of Light award.

These awards, which are decided by Queen Elizabeth, thank inspirational volunteers across the 53 Commonwealth nations for the difference they’re making in their communities and beyond. 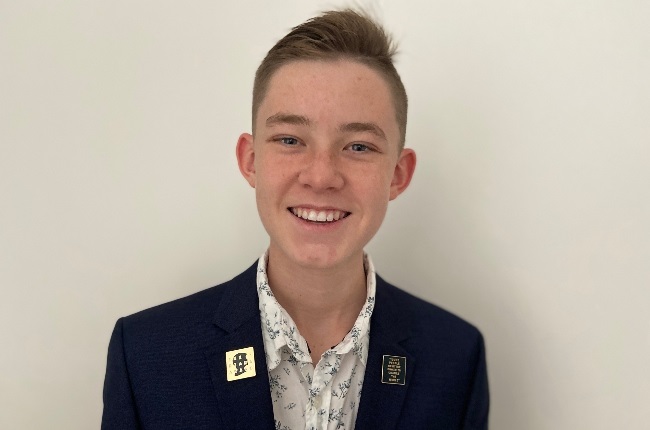 Hunter is happy to be a recipient of the Diana Award and hopes to use his voice to raise awareness about rhino conservation. (Photo: Supplied)

Hunter, who plans to be a “world-class vet” one day, hopes his awards will raise even greater awareness about rhino conservation. “I want to keep educating future generations about their responsibilities to our rhino, our wildlife and our planet,” he says. “We need to protect these gentle giants.”

We live in a world where facts and fiction get blurred
In times of uncertainty you need journalism you can trust. For only R75 per month, you have access to a world of in-depth analyses, investigative journalism, top opinions and a range of features. Journalism strengthens democracy. Invest in the future today.
Subscribe to News24
Next on You
This Centurion man fondly known as Oupa Coke has an impressive Coca-Cola collection